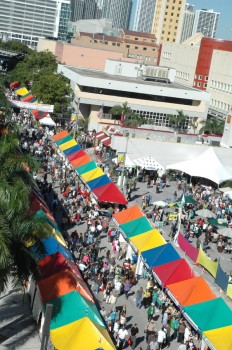 Celebrating its 28th anniversary is the Miami Book Fair International, the oldest and largest gathering of authors coming from all over the world to read from their books in English, Spanish, French, and Haitian Kreyol, answer questions from the audience, and sign autographs.

Presented and produced by The Center @ MDC

The 28th edition of the nationâ€™s finest and largest literary gathering, Miami Book Fair International, presented by The Center @ MDC, will take place November 13-20, 2011 at Miami Dade Collegeâ€™s (MDC) Wolfson Campus, 300 NE Second Ave., in downtown Miami. The always-popular Street Fair runs Friday through Sunday, November 18-20, with more than 200 exhibitors from around the country selling books in a festive atmosphere.

The Fair, MDCâ€™s flagship cultural event, will once again treat book lovers to more than a week of cultural and educational activities, including the beloved Evenings Withâ€¦ series, the IberoAmerican Authors program, Student Literary Encounters, Childrenâ€™s Alley and the Weekend Festival of Authors, including comics and graphic novel panels, author presentations for tweens and teens, and much more. The Miami Writers Institute, a spring program of The Center, will debut a fall edition this year during Book Fair week with creative writing workshops taught by authors Pablo Medina and Robert Pinsky, among others.

This year, the Fair will showcase the rich literature and traditions of China. Fairgoers will enjoy a pavilion featuring Chinese art and music, in addition to a day-long conference on Chinese culture scheduled for Friday of the Fair, and readings by Chinese and Chinese American writers during the Festival of Authors.