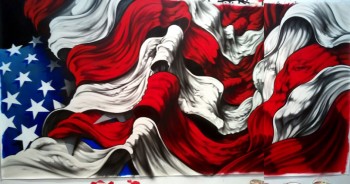 Internationally renowned creative misfit and artistic anomaly EVL Worldâ€™s, Erni Vales has announced that he will be breaking away from his 13 show series â€œAn Unusual Journeyâ€ to present a special collection of patriotic paintings and raise funds for charity as a tribute of 9/11 during the Art District/Wynwood Art Walk, on September 10, 2011.

Prior to the 9/11 atrocities, Vales had compiled approximately 10-15 versions of the American Flag. With perceptions of the national symbol changing after the 9/11 events Vales decided to refrain from these paintings promising to revisit the theme when the time was appropriate, 10 years later that time is now.

10 years later, Vales will debut his new American Flag series and give significant amount of the profits sold to â€œ Stephen Siller: Tunnels to Towersâ€ a non-profit organization dedicated to honoring the legacy and work of New York City Firefighter, Stephen Siller, who passed away during 9/11. The organization has two main programs: In the line of Duty and In the name of love; assisting children through scholarships, supporting Stephenâ€™s House for orphaned, abused and neglected children, building homes for surviving quadriplegics from combat, and finally the memorial Tunnel To Towers Run, which supports the Weill-Cornell Burn Center and Burn Centers across America.