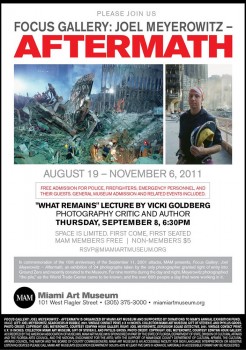 Focus Gallery: Joel Meyerowitz – Aftermath
In commemoration of the 10th anniversary of 9/11, Miami Art Museum presents “Focus Gallery: Joel Meyerowitz â€“ Aftermath,” an exhibition of photographs taken by the only photographer granted right of entry into Ground Zero after the September 11, 2001 attacks on the World Trade Center in New York City. For nine months during the day and night, Meyerowitz photographed “the pile,” as the World Trade Center came to be known, and the over 800 people a day that were working in it. The exhibition consists of 24, recently-donated photographs, presented in the Focus Gallery section of the Museumâ€™s Permanent Collection installation.

â€œI was making photographs for everyone who didn’t have access to the site,â€ says Meyerowitz, â€œI wanted to communicate what it felt like to be in there as well as what it looked like: to show the pile’s incredible intricacy and visceral power. I could provide a window for everyone else who wanted to be there, too, to help, or to grieve, or simply to try to understand what had happened to our city.â€

About the experience, Meyerowitz has written, â€œThe nine months I worked at Ground Zero were among the most rewarding of my life. I came in as an outsider, a witness bent on keeping the record, but over time I began to feel a part of the very project Iâ€™d been intent on recordingâ€¦ the intense camaraderie I experienced at Ground Zero inspired me, changing both my sense of myself and my sense of responsibility to the world around me. September 11th was a tragedy of almost unfathomable proportions. But living for nine months in the midst of those individuals who faced that tragedy head-on, day after day, and did what they could to set things right, was an immense privilege.â€

The photographs in MAMâ€™s collection are from a unique set of contact prints (photographs printed on a 1:1 scale from the negatives) issued by the artist in 2006. As a group, they span the entire nine month period that Meyerowitz was on site, presenting a poignant, condensed view of the clean up effort, including portraits of the workers involved. The set is introduced by a single image of the World Trade Center towers taken by the artist in the 1980s from his apartment window.

The entire set of more than 8,000 photographs taken by Meyerowitz form an archive at the Museum of the City of New York. The Aftermath series was the focus of a 2006 book, Aftermath: World Trade Center Archives published by Phaidon (reissued this year in a special 10th anniversary edition) and an exhibition organized by the US Department of State that traveled worldwide from 2002 to 2005.