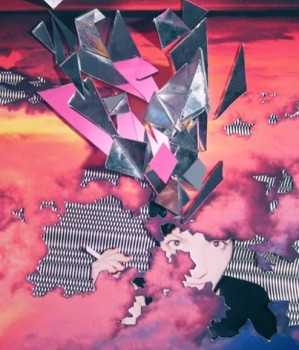 David Castillo Gallery is pleased to present Crushed Candy, a sixth anniversary exhibition with works by Jonathan Ehrenberg, Shara Hughes, Meredith James, and the TM Sisters (Tasha & Monica Lopez de Victoria). Anniversaries give pause for remembrance and revelry. Crushed Candy acknowledges the permeability of established aesthetic and art historical foundations and emblazons the significance of saturation, humor, and celebration. The result is an arcade of phenomenological experience where the human body follows an ironic second to architecture and environment. “The medium is the message,” infamously coined by Marshall McLuhan, foregrounds materiality and creates unexpected freedom to maneuver in the space remaining. The works in Crushed Candy test their mettle against the sweet ease of perception. They take as their premise a studio practice as steadfast as iron and finished forms as urgent and fantastical as the future state of candy.

Jonathan Ehrenberg streamlines his four-fold gusto for set design, still life, pantomime, and Noh Theater into videos and works on paper. A contemporary fabulist, Ehrenberg’s primary performers are animal, plant, mineral, and architecture. Human forms are latecomers to Ehrenberg’s party, arriving after the mechanical significance of his dramatic sets, transitional lighting, and raw craft of papier-mÃ¢chÃ© masks or chiffon cloud-cover. Ehrenberg’s primary occupation is creating texture for the experience of the moving image.

Shara Hughes’ mixed media on canvas works add a visual clause to the Theory of Relativity. Reveling in color, texture, and pattern, Hughes extends the dazzling invitation to believe in personal motion whether or not the source is a train on a parallel track. Viewer association may propel the interior spaces and anthropological evidence that inhabit Hughes’ canvases, or her milieu may propel viewer expectations with a jolt of the uncanny. Hughes’ works offer a visual vocabulary as tight as Etch A Sketch and Keith Haring. All Hughes’ world is an imaginative holodeck, and her subjects and viewers equal players.

Meredith James’ videos are dioramic excursions traversing interior and exterior architectures. Using tropes of cinematic transition, illusion, and simple special effects, James enacts transparent complications and solutions to her space-time relationship with elements both fabricated and real. James’ steady rove through unrelenting stage curtains, dollhouse proportions, nostalgic television sets, and the cues of bourgeois place-settings in Present Time identifies her increasingly less as a chic marauder and more as a pantomime of humorous delight springing from her environment like Chutes and Ladders. Present Time is a digital tourniquet to Truffaut’s infamous film Day for Night, wherein a fictional film’s plot, production, and the personal lives of its actors jostle for narrative dominance like waves crashing against the fourth wall.

The TM Sisters collaborate in video, performance, large-scale installation, and two-dimensional works to break the walls of time, tense, and consciousness. Their brand of exuberant, aquarium dance rites and colorful performance court viewers with the inherent movement of telepathy, hypnosis, light tricks, and the seriousness of play. The TM Sisters use media to probe human behavior as a disco ball entreats even the reluctant to the dance floor. Tasha and Monica Lopez de Victoria hijack technological nostalgia, youth couture, and the spiritual force that dares space and inhabitants both real and imagined, organic and artificial, to celebrate as one. Based in Miami, the TM Sisters channel their aesthetic to close the connotative distance between tropical and topical in all environments and experiences.

Jonathan Ehrenberg received his MFA from Yale and has exhibited widely and received a number of important residencies including the Lower Manhattan Cultural Council’s Workspace (2010-2011). A graduate of Rhode Island School of Design, Shara Hughes’ upcoming exhibitions include “Paint” at the Saatchi Gallery, London. Meredith James received her MFA from Yale University and a recent screening of her work was at the ICA Boston in 2010. Tasha and Monica Lopez de Victoria (TM Sisters) received degrees from New World School of the Arts and Florida International University respectively, and have exhibited widely in museum exhibitions nationally and internationally.