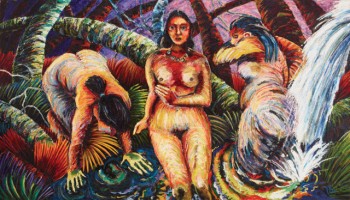 Dress to impress with your most daring heels and your cutest black dress because it’s a girl’s night out at the first LoweDown of the season! Of course guys are invited too! Featuring: Door Prizes by MIA shoes, Sushi by RA Sushi, Full bar by Bacardi, Wine by Rex-Goliath, Martinis by PAMA, Vitamin Water Zero, and a tour of the current exhibition, Sacred Stories, Timeless Tales, by LAM Associate Director and exhibition curator Denise Gerson. Special thanks to MIA Shoes and RA Sushi.

Mythic Traditions in World Art from the Lowe Art Museum
Through October 23, 2011

Sacred Stories, Timeless Tales addresses multi-cultural mythic traditions in art, drawn exclusively from the permanent collection of the University of Miami Lowe Art Museum, which distinguishes itself among South Florida art museums by the depth and breadth of its holdings, which span 5,000 years and represent the art of Europe, the Americas, pan-Asia, and Africa. Concepts of creation, love, morality, mortality, seasonal regeneration, the cosmos, beauty, divinity, heroes, and war are explored in over 100 examples of pottery and ceramics, paintings, works on paper, sculpture, and textiles.

Mythic traditions are rooted in fictitious, symbolic narratives developed by cultures through time, which address the relationship between the inexplicable and the explicable, between the powers and forces that control the world and the human beings who occupy that world. Frequently reflecting regional differences, these sacred stories helped, and in some present-day cultures continue to help elucidate a people’s religion, history, value systems, rituals, and concepts of self. As myths exist apart from, and are not dependent upon, verifiable facts or scientific objectivity for their impact on society, they typically involve deities, heroes, wondrous creatures, and fantastic events. Some renderings faithfully adhere to time-honored visual conventions. Others reflect more personal interpretations of traditional subject matter.

Among the featured objects are a 6th century BCE Greek, black-figure hydria, which describes a myth about the goddess Athena in the presence of Ajax and Achilles; Jacob Jordaen’s The Judgment of Pari, painted around 1620; storyteller figure by Native American artist Mary Trujillo; an African Kuba mask known as Moshambwooy that represents the myth of the ancestral figure Woot; a 19th century Japanese wood-block print that relates a ghost story; Richard Stankiewicz’s scrap metal sculpture, The River Styx, from 1953; St. George by Moises Finale; Theodoros Stamos’ Persephone from 1945; a contemporary metal cutout of a siren by Haitian artist Serge Jolimeau; and a 10th century sandstone sculpture of Ganesha Breaking His Tusk to Throw at the Moon.

Mythological narratives were originally transmitted and preserved orally, during eras when people could neither read nor write, and paper was not available. Written traditions did not develop until a later moment on mankind’s cultural time line, as scribes and poets sought to formally preserve stories in writing, lest they disappear. Artistic expression dramatically bridges both word-based systems, transforming into vivid pictorial or sculptural forms, concepts that spoken and textual forms of communication can only convey through mental images. Regardless of cultural derivation or individual inspiration, all the works on the exhibition represent an artistic urge to visually address those universal questions to which mythologies respond, and which unite humankind through time.

The Lowe Art Museum is located at the University of Miami at 1301 Stanford Drive, Coral Gables. Hours are 10 a.m. to 5 p.m. Tuesdays, Wednesdays, Fridays and Saturdays, 12 to 7 p.m. Thursdays and 12 to 5 p.m. Sundays. Regular Admission (not including special events) is $10; $5 for Seniors and Non-UM Students; Free for Lowe Art Museum Members, University of Miami students, faculty and staff, and children under 12. For more information on membership or the museum, call 305.284.3535 or visit www.lowemuseum.org.