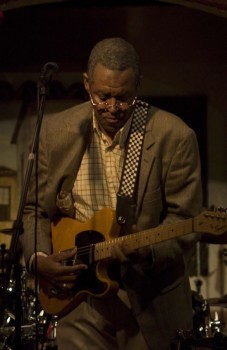 Composer, multi-instrumentalist and vocalist Big Poppa E is a prominent and influential figure in the late 20th century blues and roots music. Though his career began more than four decades ago with American jazz, he has broadened his artistic scope over the years to include music representing many varied genres. Born Mutasim Ra’id Faisal in New York in 1948, his father was a jazz pianist, composer and arranger of Caribbean descent, and his mother was a gospel singing schoolteacher from Louisiana. Early in his childhood, the young musician learned to play the tenor and alto sax, trombone and harmonica, and he loved to sing. He discovered his father’s guitar and became serious about it in his early teens when a guitarist from Mississippi moved in next door and taught him the various styles of Muddy Waters, Lightnin’ Hopkins, John Lee Hooker and Jimmy Reed and other titans of Delta and Chicago blues.
Musi, as he was affectionately called, studied economics at Syracuse University in the late 1960s and later law at the University of Chicago. Inspired by a dream, he adopted the musical alias of E and later was crowned “Big Poppa E” by one of Miami’s top promoters, DJ Oski. After graduating, he headed west in to Los Angeles, where he worked as a studio musician for the next 15 years. Around this same time, Poppa E also mingled with various blues legends, including Koko Taylor, Muddy Waters, Junior Wells, and Sleepy John Estes. This diversity of musical experience served as the bedrock for Poppa E’s first three recordings: Southern Style: Blues Sessions (2006), Mississippi Reminiscence (2007) and Five Long Years, A Tribute to Carey Bell (2008). Drawing on all the sounds and styles he’d absorbed as a child and a young adult, these early albums showed signs of the musical exploration that would be Poppa E’s hallmark over the next few years.
In 2008, Poppa E carved out a unique musical niche with a string of adventurous recordings, including â€œBlues A Healerâ€, â€œCrossroadsâ€ and â€œAnthology du Bluesâ€. In 2008, Poppa E’s version of â€œTerraplane Bluesâ€ was nominated by the International Academy of Independent Artist for Best Blues Song of the Year and his album, â€œBlues A Healerâ€ was nominated for Best Blues Album of the Year by Cash Box Magazine. Poppa E’s recorded output slowed somewhat during 2010 as he toured relentlessly and immersed himself in the music and culture of his new home in Miami. Still, 2010 saw the well-received release of â€œBig Poppa E Liveâ€ in 2010, as well as his celebrated children’s album, â€œChildren’s Classicsâ€ on the Black Owl Music label.
Poppa E is headed back into the studio in early 2011 to work on a new projected aptly entitled, â€œBootleggers Bluesâ€. As the title suggests, this twelve-track set marks the fortieth anniversary of Poppa E’s rich and varied recording career by mixing original material, chestnuts borrowed from classic sources, and songs written by a cadre of highly talented guest artists from around the globe. “The one thing I’ve always demanded of the records I’ve made is that they be listenable and danceable,” he says. “If the record is danceable, it’s listenable, it has lots of different rhythms, it’s accessible, it’s all right in front of you. It’s a lot of fun, and it represents where I am at this particular moment in my life. This record is just the beginning of another chapter, one that’s going to be open to more music and more ideas. Even at the end of forty years, in many ways my music is just getting started.”