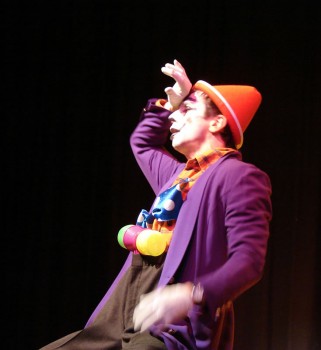 Tickets are $38 for the matinee and $42 for the evening performance and are available at the Box Office, by calling 305/397-8977 or purchase online at www.stagedoorfl.org.

Receiving accolades such as â€œa true theatrical fusion reactor,â€ â€œgalvanic performance,â€ â€œa storm of show business energyâ€ and â€œferociously talentedâ€ was just part of British-born Petersonâ€™s motivation in creating his own, about song and dance stars who were the whole package.

â€œSong Man Dance Manâ€ is a joyous celebration of seven consummate artists who captured the eyes, ears and hearts of their audiences. They are Fred Astaire and Gene Kelly, whose unique styles transformed the movie musical; Donald Oâ€™Connor and Sammy Davis, Jr., both geniuses who had to struggle for appropriate recognition; Bobby Darin, who made the leap from â€˜50s pop-star to sophisticated concert artist; the eccentric, brilliant Anthony Newley, whose pulsating, emotional style reverberated throughout the musical theater world; and, of course, George M. Cohan, who invented the song and dance man.

â€œI wanted to remind people of just how good it can be; of how magical the world of show business was in those golden days because of these performers,â€ says Peterson about why he was motivated to create the one-man show. â€œThe dazzling talent and charisma of these artists inspire life-changing devotion.â€

With personality and talent to spare, portraying multiple artistic personalities is not a stretch for Peterson. When â€œSong Man Dance Manâ€ premiered in New York in 2008, a Cabaret Scenes critic reported: â€œWhen he (Peterson) plants his feet and looks into the lights, itâ€™s the kind of razzle-dazzle showmanship that will send goose bumps up your spineâ€¦â€

â€œSong Man Dance Manâ€ is presented by Derelle Bunn and David Torres, co-founders and executive producers of the recently opened Miami Beach Stage Door Theatre. With the new theatre housed in the Byron Carlyle, the pair continues their 19-year tradition of producing award-winning musicals at the Broward Stage Door Theatre, their flagship theatre in Coral Springs.

DiSh â€“ Dinner and a Show
The City of Miami Beach has launched â€œDiSh,â€ the moniker for Dinner and a Show, a program in which participating restaurants near the Miami Beach Stage Door Theatre offer ticket holders a 15 percent discount on their lunch or dinner simply by presenting their ticket or ticket stub. Miami Beach residents also receive a 10 percent discount on tickets at theatre. For the â€œdishâ€ on participating restaurants, log on to www.mbculture.com/dish.