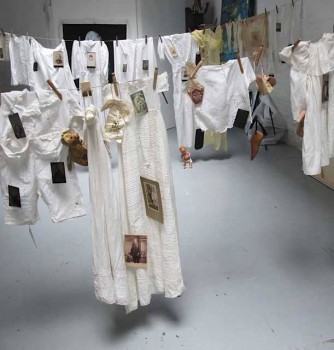 Sponsored by Vita Coco
Rising Artist Cecilia Moreno-Yaghoubi Celebrates Hispanic Heritage Month By Putting It All On The Clothesline, Exposing Memories Of Native Past

In celebration of Hispanic Heritage Month (September 15 – October 15), Cecilia Moreno-Yaghoubi unveils How I Lost My Accent: The Black and White Series – a pop-up exhibition about the Colombian artistâ€™s repressed and unearthed memories. In addition to presenting new oil and mixed media paintings, a series of clotheslines mounted with dated worn dresses, pinned with weathered black and white photos and antique dolls, will transform the space into a virtual maze of the unconscious mind. Reconstructing and romanticizing the past with found objects and two-dimensional works, Moreno-Yaghoubi creates a tangible reflection of her memory for viewers. For more information please visit www.ceciliamyart.com or call 917.295.0191.

On view until October 8, 2011, events are free and open to the public, including:

â€œAs a Colombian immigrant who – even after 40 years – struggles with feelings of displacement, I have rewritten my past many times to fit into this countryâ€™s melting pot philosophy,â€ said Moreno-Yaghoubi. â€œComing of age in America, I felt rushed to lose my accent and adopt a new identity. The Black and White Series is inspired by my childhood memories and how watching my mother sew, collect odds and ends, and hang-on to everything for fear that it could be taken away has informed my artistic voice.â€

In Cali, Colombia, the artist often spent time playing with her dolls beside her mother while she labored over the sewing machine, making clothes to sell and generate income for her eight children. The exhibit How I Lost My Accent: The Black and White Series is a reflection of Moreno-Yaghoubiâ€™s experiences and nostalgic nature, and has generously been supported by DACRA. In addition to aforementioned event dates, the pop-up exhibit will be open September 10 to October 8, 2011, Wednesday through Friday from 12:00 p.m. to 5:00 p.m.