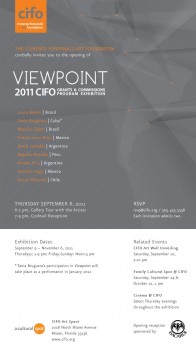 We suggest you RSVP and purchase your ticket in advance.

Viewpoint: 2011 CIFO Grants & Commissions Program Exhibition commemorates the eighth annual exhibition dedicated to the foundation’s grants programs at the CIFO Art Space. The emerging artists selected as recipients of CIFO’s 2011 grants are: Laura BelÃ©m (Brazil), Marcius Galan (Brazil), Fritzia Irizar-Rojo (Mexico), BegoÃ±a Morales (Peru), Amalia Pica (Argentina), and Antonio Vega (Mexico). The mid-career artists selected for CIFO’s Commissions award are: Tania Bruguera (Cuba) and Alicia Villarreal (Chile). This year also commemorates the first time in four years since the foundation has awarded its prestigious Achievement Commission, this time to David Lamelas whose artistic contribution in the past 30 years has been a pioneering force in the development of conceptualist practices and has laid the framework for a younger generation of artists who have expanded these practices in to their own.