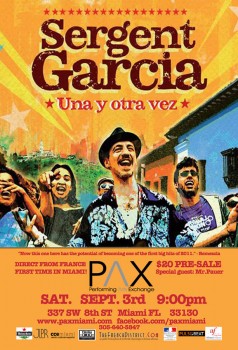 For the first time in Miami, the pioneer of a unique sonic groove, Sergent Garcia will bring PAX a musical experience representative of his French and Spanish background and passion for Latin alternative and experimental music.

Sergent Garcia, an original in the Latin Alternative scene, mixing salsa, reggae, ska and dancehall into a sonic blend hails from France representing his punk attitude. Fans of all music, whether Latin, reggae, or hip-hop will undoubtedly love Sergent Garcia

As one of the original masters of the Latin American and European mestizo music scenes, Sergent Garcia went to Colombia to uncover some of the new hottest sounds. The result is his new album, Una y Otra Vez, a statement of return to his roots, singing in Spanish, some French, and mixing salsa and reggae. His diverse background – a mix of French, African and Hispanic roots- is reflected in his one-of-a-kind sound.