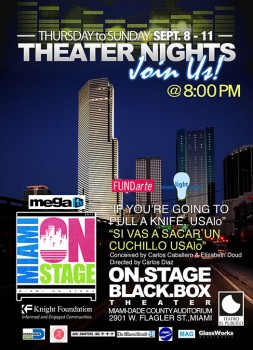 If youâ€™re gonna pull a knife, USAlo urges action around the apparently gloomy themes of petroleum pollution, hopelessness and absurd sea life in search of something upbeat to cling to: a magic solvent that will clean the ocean, the prospect of the perfect job that pays you to do what you love to do, or a piece of floating plastic garbage large enough to float on without drowning. This evening length work, Directed by Havana-based Carlos Diaz of Teatro El Publico, is about the petroleum industry, unemployment and mermaids and impossible love.

Using the rearranged texts of playwright Samuel Beckett as a foundation to piece together dramatic exchanges between an unemployed oil platform worker and an out of work Seaworld character actress, their alter-egos, (a real mermaid and petroleum itself), are drawn to, and react against one another as they make small talk around the woes of being jobless and watching the planet deteriorate in a sea of plastic and toxic pollution around them. The text is presented completely in both English and Spanish.