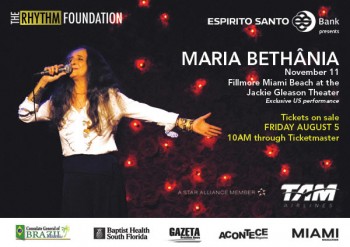 Exclusive US concert date – first appearance in Florida since 1988!

“With her low, throaty voice, Miss Bethania caresses her ballads, letting the melodies stretch out, warm and languorous. She sings love songs with breathy intimacy; other ballads pour out phrase by tender phrase as if she were thinking them up on the spot. For all the rich melancholy of her ballads, Miss Bethania can also breeze through uptempo songs, riding the propulsive rhythms of her home state, Bahia, and tossing off lyrics in easy syncopations.” — The New York Times

Singer and icon, Maria BethÃ¢nia became a major star in Brazil as one of the founders of tropicalia in the late 1960s. Along with her brother, Caetano Veloso, and musical partners Gilberto Gil and Gal Costa, the four young musicians created a cultural wave still rolling today. Shirking the repression of Brazil’s military dictatorship, Bethania and company married the electricity of the psychedelic era and youth culture with the traditional beauty of Brazilian music and culture. She quickly earned her nickname “abelha rainha” (queen bee) of MPB (Brazilian Popular Music). In five decades, Maria Bethania has released more that 30 albums, having shared the spotlight with legends like Edu Lobo, Chico Buarque and her colleagues from Bahia, Gil, Gal and brother Caetano. Since the very beginning of her career, her work is synonymous with professionalism, integrity and a deep respect for the craft of songwriters, poets and musicians.