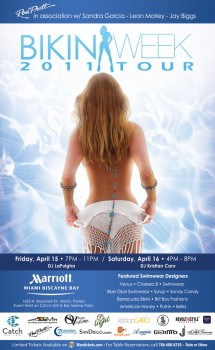 A Bikini Fashion Showcase Extravaganza
Bikini Week was launched 2 years ago in San Diego and is making its way across the county, hitting Americaâ€™s top Spring Break destinations. The tour debuted March 12th in Hollywood at The Kress with 1,600 attendees and will being coming to Miami Beach at the Marriott Biscayne Bay, with a rooftop show with downtown Miami as the back drop, April 15-16th.

Bikini Week Tour will stop at the Marriott Biscayne Bay for two shows on Friday April 15th at 11 pm and Saturday April 16th at 7:30 pm. This show is a platform for established and up-and-coming swimwear designers to reveal their summer collection. Designers for the shows are Venus, Syrup, Chelsea B, Barracuda, Sandy Candy, and Bonsoir Bella. The most beautiful women in the nation are located in Miami and Bikini Week is also a platform for aspiring models. There will be a modeling casting call for local talent to appear in the Bikini Week fashion show that weekend on Thursday, April 14th from 11am to 3pm and on Friday, April 15th from 10am to 2pm at the Marriott Biscayne Bay.

Bikini Week was created by Micheal Lee of A Style Concierge and is produced by ASC Events of San Diego in partnership with Cherpleâ„¢, California Tan, Taylor Guitars, MobiliqueMobile, MTV 3, San Diego Event Management and A Style Concierge. It started as a Southern California event, and due to the success in San Diego the past two years, it drove the producers to expand to a national tour.

More information on Bikini Week Tour, as well as information for potential sponsors, promotional partners or exhibitors of the 2011 national series can be found at www.bikiniweektour.com.

Debuting in Miami for the first time, this astonishing show will be featured for Two Days in April at the newly renovated Marriott Biscayne Bay Hotel.The Catch Bar & Grill Marina Patio will play host to this spectacular event.

Limited Space is available so make sure you purchase your tickets immediately.
For table reservations call:786-600-8210
This event will happen rain or shine.