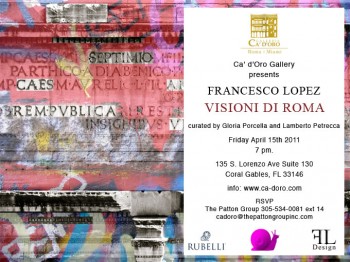 Opening Night Cocktail Party To Be Held On April 15, 2011
Exhibition Will Be On Display From April 15th Until June 15th

On Friday, April 15, 2011, Francesco Lopez will host a cocktail reception at Galleria Caâ€™ dâ€™Oro Miami with the US showing of his most recent work â€œVisioni di Roma.â€ The gallery will feature various contemporary photographs, each of which were created using familiar imagery, realism and nature â€“ all inspired by Lopezâ€™s love of Rome.

Galleria Caâ€™ dâ€™Oro was the perfect location to showcase this collection, â€œVisioni di Romaâ€, as the galleryâ€™s main objective is to highlight and showcase Italian & European art to the US. Gloria Porcella and her business partner, Lamberto Petrecca, both will curate Lopezâ€™s show. â€œThe title of Francescoâ€™s art show, â€˜Visions of Romeâ€™ compounds two loves. Love for a city, Rome, which no longer is a â€˜physicalâ€™ place but becomes, in his work, an archetype of constant regeneration, and, precisely because of it, remains equal to itself across the time, becoming a category of the Spirit. Therefore not â€œaâ€ city but â€œtheâ€ City.â€ â€“ Lamberto Petrecca on Lopezâ€™s â€œVisioni di Roma.â€

Since the beginning of his career, Lopez has used photography to complement his art and with it he brings to life a composition, geometry, as well as details in which all these components transform an authentic emotion into a look that knows how to capture the essences of things in the particulars of reality. Inspired by a visit to the Coliseum in Rome and using his beloved Leica camera, Francesco Lopez created â€œVisioni di Roma.â€

Among the 22 pieces in the collection of â€œVisioni di Roma,â€ one of Lopezâ€™s favorite works is â€œRoman Graffiti,â€ a photograph measuring 90 x 120 cm. Lopez was inspired and loved the graffiti and combination of colors that he found on the side of an old Roman wall. This he feels is his tribute to one of his favorite painters, Jackson Pollock. This piece captures the essence of nature and Lopez as an artist. Lopez strongly believes â€œeverything already exists in nature, even so great a work as the one done by Pollock.â€

Francesco Lopez is a renowned architect and interior designer known throughout Europe and quickly making a name for himself throughout the United States. Lopez has always had an ardor for art and has been using photography as an expression of his art since he was at the university in Rome. He studied and graduated with a degree in architecture, never formally studying art. â€œI believe that you donâ€™t need to study art to be an artist. Art is the expression of what you have in your soulâ€ â€“ Francesco Lopez.

Following the Opening Night Cocktail reception, Francesco Lopezâ€™s art works will be on display from April 15, 2011 until June 15, 2011, please call 305.205.5981 to schedule an appointment.
Photos of the artistsâ€™ works, background information and interview opportunities with Francesco Lopez are available. Your attendance and coverage of this cocktail preview and art installation is invited.

About Galleria Caâ€™ dâ€™Oro â€“ Miami:
Located at 135 San Lorenzo Avenue, in Coral Gables, the Galleria Caâ€™ dâ€™Oro Miami branch promotes Italian and European Art in the United States. Galleria Caâ€™ dâ€™Oro was established in Rome in 1970, by Antonio Porcella. Antonio Porcella is a member of the de Chirico Foundation. Now under the leadership of Gloria Porcella (daughter of Antonio) and Lamberto Petrecca, Galleria Caâ€™ dâ€™Oro Miami is an extension of the renowned contemporary art gallery in Rome, which has done several important exhibitions in Italy and in the United States. A few major collaborations include, â€œOmaggio a de Chiricoâ€ in New York, Los Angeles and Miami; in addition, they have held the aegis of the UN, patronages of Italian and foreign institutions, G8 organization and have held exhibitions with a number of well-known organizations.

Galleria Caâ€™ dâ€™Oro Miami, launched during Art Basel Miami Beach, the most important art show in the United States, with the Pink Snails public art exhibit courtesy of the international artistic collective Cracking Art Group as part of the Regeneration Art Project. The Pink Snails can currently be found in Coral Gables, Florida and will soon be continuing their journey in bustling Metropolitan cities all over the nation.
For more information on the museum, visit http://ca-doro.com/miami/home.