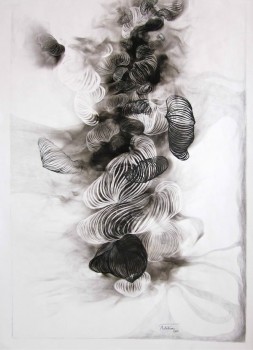 Nature and introspection voice the artist’s latest insights in her long-awaited first solo exhibit.
Reprinted with permission from the original Essay by Egberto Amenas from his blog suite 101.

Earth’s Fertility, the first solo exhibit by Ileana Tolibia currently at the Edge Zones Art Center until April 29, 2001, may come about as a delayed prospect for an artist who has for long, despite her youth, hatched a voice rooted in one of the richest pictorial traditions of the Americas. She was born in Cuba and settled in the United States soon after earning an art degree in 1995 from the celebrated San Alejandro National Academy of Fine Arts in Havana.
As the artist sought broader horizons abroad and pursued further training at the New World School of the Arts and the University of Florida, her imagery seems to have centered ever more on the primal elements of nature and the bearing of its incessant changes on the most tenacious of its creatures. Earth’s Fertility splices yet another plank on the two-way growth of Tolibia’s creative venture, whereby her configurations also chart new passageways to her spiritual chambers.

The Magic of Suggestion
Nature and introspection voice the artist’s latest insights in her long-awaited first solo exhibit.

Nature and introspection spark the bidirectional life of these late pieces. For all their voluptuous swirls, they “look” inward as well, foraying deep into the inner terra incognita from which they have sprouted. In what Baudelaire called the magic of suggestion, here an avid observer of early cultures, mythology, and the always-furtive props of the mind undergirds the gestural organicity of the artwork.
Earth’s Fertility indeed delves far into the interior lushness of nature, but without the ruse of a fit within a literal framing. Never jejune, the analogy calls instead to the free, self-defining amazonian fecundity akin to the artist’s origins and upbringing.
After all, Cuba and its inspiring frondage staged the keenest of all transculturations in the West, and this dynamic trade-off and remix of values amounted at the end to the island’s uniqueness and rarefied excellence in art. Nature there, often holding sway from its magic or marvelous appeal, supplied the feedstock for an imaginative contract with a sense of course and identity.
Transcending Flora, Cycles and Rhythms
Earth’s Fertility likewise assuages Tolibia’s urge to animate the inner self through nature and introspection. However suggestive, she gardens in this solo exhibit a proximate tangibility through a flora that grows and dances and shoots against a failed fulfillment. In a word, that life from the time of inception dangles on the throws of death.
Circling motions, or vine-like attempts to draw them, receptive sheaths, spores and warps of grass, brace a loose archetypical reference that aspires for the ultimate state of being. Earth’s Fertility, abuzz in its rhythms, enchants the viewer with perhaps a feckless antithesis to our last fatality. Meanwhile, if humans shall persist in living, imagination, timely change, and the quest for oneness will certainly ease the stay.