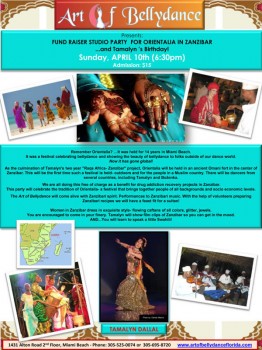 Miami bellydancers come together to help bring joy and recovery to an island in Africa.
Studio party and fundraiser at the Art of Bellydance Studio in Miami Beach

This story spans 21 years and two continents.
On April 10, 1990, a belly dancer Tamalyn Dallal opened the Mid Eastern Dance Exchange, which was the only dance school in South Beach. It was her birthday. little did she know that that studio would spawn international dance stars who would tour the world; including Bellydance Superstars Amar Gamal and Bozenka, plus many more who opened bellydance schools around the globe. Ms. Dallal became well known too, and has left Miami Beach to travel the world teaching bellydance to women from China to Patagonia. One of the popular yearly events, which took place from 1994 to 2007, was an outdoor bellydance festival on Lincoln Road called “Orientalia”. otientalia has also gone global and been produced in Argentina and Hong Kong.

Tamalyn Dallal is also a writer and burgeoning film maker. In the most recent of her three books, entitled “40 Days and 1001 Nights” she traveled to five Muslim countries and lived in each one for forty days. One of the places she lived in was Zanzibar, an island of the coast of mainland Tanzania (East Africa). On this beautiful island she found thousands of heroin addicts. Unbeknownst to her, the young man who was helping her find her way was also an addict.

There were no rehab programs in the entire region. Most people thought that recovery was impossible and that many from this generation were lost forever. But this young man went to a recovery program in Kenya, then came home to Zanzibar and opened his own program. He now has five recovery houses and a sixth on the way. He has helped hundreds of addicts find hope and sobriety.

In July, 2011, fourteen bellydancers from around the world will go to Zanzibar to take a dance workshop and cultural tour with Tamalyn Dallal and her famous protoge, Bozenka. During this time, Tamalyn Dallal and friends will present the Orientalia Festival in a historic Arab fort in Zanzibar. This festival will benefit the drug rehabilitation homes and people will be able to come and learn how their sons can also recover from addiction. It is a festival of hope.

The studio party/performance, on April 10th in Miami Beach will feature 20 bellydancers, including Tamalyn Dallal. Funds raised will go toward producing the Orientalia festival in Zanzibarâ€¦Dancing to help Zanzibar become drug free.