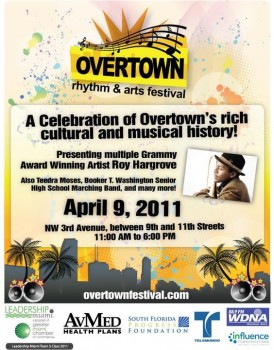 Leaders of the Overtown and Greater Miami community are throwing a party you don’t want to miss this Saturday.

The Overtown Rhythm & Arts Festival, organized, planned and implemented by volunteers from the non-profit group Magic-In-Action and local leaders of the Overtown Community, aims to celebrate the rich history of one of Miamiâ€™s earliest settlements. Magic-In-Action is Team 5 of the Greater Miami Chamber of Commerceâ€™s Leadership Miami 2010 â€“ 2011 program. Set on the charming main street of NW 3rd Avenue, between 9th and 11th Streets in the Historic Overtown District, this one-day annual Spring Festival comes alive on April 9, 2011 from 11:00 a.m. to 6:00 p.m. with local food, art, and entertainment. This yearâ€™s event will include local church choirs, the Booker T. Washington Marching Band, and local and national musical artists. Overtown Food vendors will treat festival goers with authentic BBQ and southern cooking, Caribbean flavors, and locally grown produce. Admission to the festival is FREE. Join us for this family-friendly event.

The first ever event of its kind, a truly local festival by and for the people of Overtown and Miami.

Grammy Award Winner Roy Hargrove Headlines a Dazzling Line-up of Jazz, Gospel, Hip Hop and African Cultural artists during the First Overtown Rhythm and Arts Festival on April 9, 2011 where Luther â€œLukeâ€ Campbell will be named King of the inaugural event

The multiple Grammy award-winning Jazz trumpeter Roy Hargrove will headline the star-studded stage of the inaugural Overtown Rhythm and Arts Festival, to be held in the main street of NW 3rd Avenue, between 9th and 11th Streets in Miamiâ€™s Historic Overtown District, on Saturday April 9, 2011 from 11:00 a.m. to 6:00 p.m.

The Overtown Rhythm & Arts Festival, a one-day, FREE, street festival, aims to celebrate the rich history of one of Miamiâ€™s earliest settlements, Overtown. During the festival, the heart of Miamiâ€™s Historic Overtown District will come alive with food, music, art, entertainment, and activities for the entire family.

Jazz vocalist Nicole Yarling is a lecturer in jazz vocal performance at the University of Miami Frost School of Music. Nicole Yarling is a rising star in the jazz community. For more than a decade, she has been a part of South Floridaâ€™s musical world as a singer and violinist working in most musical genres. Her rich voice and musical prowess has made her a local favorite. Yarling has worked with music legends Dizzy Gillespie and Joe Williams and has gone on tour as the featured soloist with Jimmy Buffett for over two years.

Luther â€œLukeâ€ Campbell grew up in Overtown and, after his many professional successes has remained an involved member in the Overtown community. He is Co-founder of the Liberty City Optimist Club, and President of the National Youth football & Cheering League with 4,000 participating kids and 350 volunteers. He is also an advocate for improving education in the community.