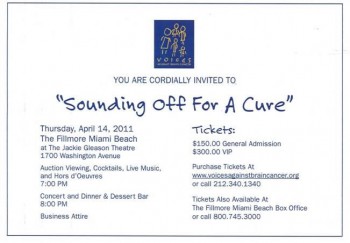 On Thursday, April 14th at The Fillmore Miami Beach at The Jackie Gleason Theatre guests will gather together to raise money to benefit Voices Against Brain Cancer. Voice Against Brain Cancer is a foundation dedicated to finding a cure for brain cancer by advancing scientific research increasing awareness within the medical community and supporting patients, their families and caregivers afflicted with this devastating disease. The foundationâ€™s first event in South Florida, â€œSounding Off For a Cureâ€ is the vision of Founder, Mario Lichtenstein, and his family after they lost their son and brother, Gary Lichtenstein, after his battle with brain cancer that sadly took his life in 2003 within the first year of his diagnosis at the young age of 24.

â€œWeâ€™ve lost great minds to brain cancer. Use yours to help us find the cure today.â€ – Mario Lichtenstein, Founder of Voices Against Brain Cancer.

The star-studded benefit will feature performances by artists whose lives have all been effected by brain cancer including The Beach Boys (Rock & Roll Hall of Fame, Grammy Lifetime Achievement Award Honorees), Gloria Gaynor (Grammy Award Winning Artist), Lou Gramm (Singer & Songwriter & former â€˜Foreignerâ€™ lead vocalist), and The Osmond Bothers (Peopleâ€™s Choice Award Honorees). All of the eveningâ€™s performances will be accompanied by the Frost School of Musicâ€™s Henry Mancini Institute Orchestra. Additionally, performers will make a special tribute to George Harrison, Celia Cruz, Bob Marley and Nara LeÃ£o, all of whom have lost the battle to brain cancer. Guests will enjoy cocktails, hors dâ€™oeuvres and a live and silent auction followed by an unforgettable performance.

Additional event components will include a ceremony for the 2011 VABC Courage Awards which is presented to select individuals who have demonstrated tremendous courage in their fight against brain cancer. Other award recipients will include Joseph D. Rosenblatt, M.D. (Sylvester Comprehensive Cancer Center University of Miamiâ€™s Interim Director), Pedro Martinez (Former Major League Baseball All Star), Jorge Plasencia (Chairman and CEO of RepÃºblica) and Jesse Stoll (son of the founder of Fantasma Productions).

Voices Against Brain Cancer is a non-for-profit public charity/ one hundred percent of the ticket sales and auction proceeds will support innovative research and programs for brain cancer.

Our mission is to find a cure for brain cancer by advancing scientific research, increasing awareness within the medical community and supporting patients, their families and caregivers afflicted with this devastating disease.

Voices Against Brain Cancer was started in memory of Gary Lichtenstein who lost his valiant battle with brain cancer on October 1, 2003. Gary was living in Chicago and working as an options trader at Wolverine Trading when he was diagnosed with a brain tumor in March of 2003. He was 24 years old at the time. After three months of radiation, Gary slipped into a coma from which he did not recover.

Over the past 30 years, very little progress has been made to treat brain tumors. Only with cutting-edge scientific research and funding of clinical trials will we be able to effectively fight this disease. Voices Against Brain Cancer will promote and support this type of research within the medical community by working with those doctors that are committed to curing and treating brain tumors. In addition, the foundation continually works to fund support groups for patients and caregivers.

At this time, brain tumor research is underfunded and the public remains unaware of the magnitude of this disease. The cure rate for most brain tumors is significantly lower than it is for many other types of cancers. Our Foundation is driven by these facts and committed to finding a cure. It is the goal of our Foundation and its supporters to fund the research that will directly impact those affected with brain tumors. For more information, please visit: www.voicesagainstbraincancer.org.