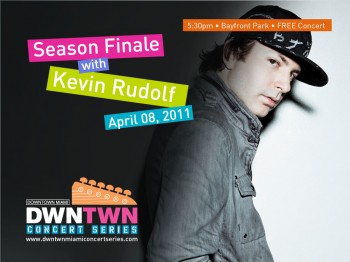 We have had an awesome 3rd season with great artists like the Spin Doctors, South Florida Jazz Orchestra, Locos Por Juana and so many other amazing bands.

Kevin Rudolfâ€™s music mixes rock anthems with urban city sounds. His Billboard top 10 hit â€œLet It Rockâ€ jams in sports arenas across the nation and rocked the NBA 2009 AllStar game. Since storming onto the scene he has worked with top artists including Lil Wayne, Kid Cudi, Flo Rida and the Black Eyed Peas.

Donâ€™t miss this concert, we wonâ€™t be back â€˜til October kicking off Season 4 of the DWNTWN Miami Concert Series.

As always this show is a sunset happy hour and food and drinks are available.