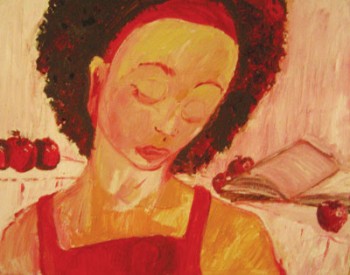 Eduardo Hernandez, The Cook, 2009, oil on canvas, 16â€ x 20,â€ courtesy of the artist.
Book People is a series of visual stories created by self-taught artist and library advocate Eduardo Hernandez. In celebration of the Miami-Dade Public Library Systemâ€™s 40th anniversary, Hernandezâ€™s oil paintings portray real life people making use of the library. The narrative behind Hernandezâ€™s insightful paintings can either be â€œtragic, humorous, or joyousâ€ and though each is accompanied with a brief story, the artist encourages the viewer to approach each work with a fresh perspective by composing larger stories and originating variant themes that each individual can interpret on their own.
The Book People series was done during a summer spent doing supervised fieldwork and volunteering at a branch of the Miami-Dade Public Library System.

About the artist:
Eduardo Hernandez is a lifelong resident of Miami. He is an educator and a local self-taught artist interested in exploring social issues. His work has been shown at Miami Dade College and at the Hortt Memorial Competition, Museum of Art of Fort Lauderdale. Hernandez received his B.A. in History and his M.A. in Curriculum and Instruction from Florida International University (FIU); a Masterâ€™s degree in Library and Information Science from the University of South Florida, and is currently working on a doctorate in Education at FIU. While Hernandez continues to experiment with various other types of art, his recent focus has primarily been in drawing and figurative painting.