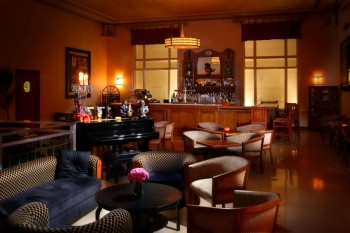 On Friday, April 29, 2011, National Hotel Miami Beach will host a royal affair in honor of the much-anticipated marriage of Englandâ€™s Prince William to fiancÃ© Kate Middleton. Held at The Restaurant and Blues Bar from 6:00 a.m. until 11:00 a.m., the broadcast viewing party will offer guests the opportunity to watch the festivities on a large projector screen while enjoying a traditional â€œFull English Breakfastâ€ consisting of fried eggs, English-style sausage, rashers of crispy fried bacon, browned mushrooms, black pudding, a browned half tomato and fried bread. For those who miss the live viewing of the celebrated coupleâ€™s â€œI doâ€™s,â€ Blues Bar will continue to loop the footage throughout the day accompanied by Kir Royal cocktails for $6 each. Guests are invited to enjoy the breakfast for $24 (gratuity and cocktails not included), while those who don their best Kate Middleton hat will receive a complimentary Kir Royal. Valet parking will also be offered at a discounted rate of $10.

In what will be the largest royal wedding since Prince Charles and the late Princess Diana â€“ and not to mention the most expensive celebrity wedding ever, likely costing British taxpayers more than $20 million â€“ the marriage of Wills and Kate will commence with the arrival of the bride at Westminster Abbey, followed by an 11:00 a.m. (GMT) ceremony during which time Archbishop Canterbury Rowan Williams will marry the couple, whose eight-year courtship has drawn international attention. Witnesses and those who catch the live viewing on BBC and BBC America will then look on as the newly weds glide in a horse-drawn carriage through Britainâ€™s Parliament Square, Whitehall, Horse Guards Parade, the Mall and then to Buckingham Palace, where husband and wife are expected to make an appearance on the same balcony Williamâ€™s parents kissed after their wedding in 1981.