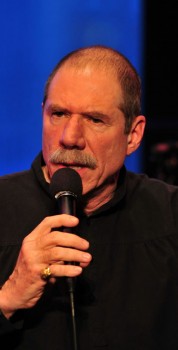 Giacomo Gates approaches jazz singing with a showmanâ€™s poise and an aficionadoâ€™s zeal. Holding court on Wednesday night in the mezzanine lounge of the Kitano New York Hotel, he was solicitous but cool. He wanted to let his listeners in on a secret, bring them into his confidence. With his deep, cognac baritone and his vintage-hipster lexicon, he seemed an appreciative throwback, eager to share credit with his precursors while mindful of keeping a little for himself.

Opening with â€œMelodious Funk,â€ a medium-bright swinger from his most recent album, â€œLuminosityâ€ (G88), Mr. Gates laid out his core principles from the start: sporty syncopations, nimble turns of phrase, sure-footed scat choruses. His stage manner conveyed a muted but stout physicality, perhaps as a byproduct of his experience. (Before turning full time to jazz in 1990, he spent more than a dozen years in heavy construction, working on the Trans-Alaska pipeline, among other things.) In his phrasing and his bearing, he upheld a distinctly masculine ideal of deceptive nonchalance.

Mr. Gates has made a specialty out of vocalese, the jazz practice of setting original lyrics to a musicianâ€™s improvisations. It is probably no accident that his vocal timbre can evoke Eddie Jefferson, a pioneer in the style. Backed more than capably here by the pianist John di Martino and the bassist Steve LaSpina, Mr. Gates made a point of finessing Jeffersonâ€™s â€œDisappointed,â€ based on a Charlie Parker solo over Gershwinâ€™s â€œLady Be Good.â€ He also made a point of featuring some lyrical inventions of his own.

Wisely, he slipped a pair of songbook ballads into the set — “P.S. I Love You” and “You’ve Changed” — and each was a model of austere, straightforward pathos. And he closed with a winner: Monk’s “Let’s Call This,” with original lyrics about the dwindling flame of a love affair.

“When I first met you / You were so inviting,” Mr. Gates sang at the tune’s start, articulating clearly. He held out the last syllable, “ing,” for five and a half beats, echoing the jangle of Monk’s pianism, and expecting everyone to get it.