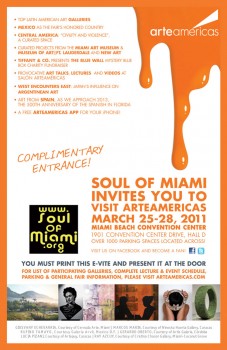 arteamericas brings the best Latin American art to Miami for the 9th year in a row.

arteamÃ©ricas, the premier fair of art from Latin America, will be returning for its ninth consecutive year. Starting on Friday, March 25th through Monday, March 28th, 2011, arteamÃ©ricas will showcase the latest trends in paintings, sculpture and multimedia from contemporary artists as well as renowned masters at the Miami Beach Convention Center.

â€œarteamÃ©ricas has been the most respected Latin American art fair since itâ€™s inception. Weâ€™re proud of this distinction, and for that reason, we raise our standards every year, create innovative projects and recruit the best galleries out there,â€ says Leslie PantÃ­n, President of arteamÃ©ricas.

The best galleries from all over Latin America, the United States, the Caribbean, Canada and Europe will be participating. The four-day arteamÃ©ricas event will feature works by internationally recognized artists and sculptors. Likewise, vanguard contemporary artists will be on hand in order to exhibit their works as the latest in Latin American modern art.

arteamÃ©ricas will be a place where art collectors and art professionals alike will gather among the present trends in paintings, sculptures, and conceptual art multimedia that distinguish the regionâ€™s art. In 2011, the fair will have close to fifty galleries taking up more than 80 spaces and showcasing more than 300 artists. The artists represented by the galleries hail from every country in the Americas and Spain. This year, the fair organizers are developing a special tribute to Mexico.

â€œFor 2011, we envision better sales for our galleries,â€ stated Emilio Calleja, Vice President of the fair. â€œThe economy is improving; the art from Latin American is getting more exposure and a gaining higher value. Our primary goal is to ensure that our galleries are satisfied with the outcome of their participation.â€

As in past years, arteamÃ©ricas has set up a Selection Committee, consisting of Julia Herzberg, an internationally renowned curator from New York; Angel Felix, Director of the Cultural Program of the Interamerican Development Bank; and Leonor Amarante, an acknowledged curator and critic from Brazil. Carol Damian, Director of the Frost Museum, has been in the committee since the fairâ€™s first year and is a member once again. All four carefully evaluate every gallery and their artists, in order to continue to raise the quality of the fair.

Conceived and organized by Dr. Herzberg, arteamÃ©ricas 2011 will bring back Art Talks, a series of four discussion tables aimed at furthering the understanding of the visual arts, biennial productions and collecting practices. The panels are structured to promote reflection and critical analysis of issues relevant to biennial directors, curators and artists, as well as the formation of private and public collections. Topics will include: Contemporary Art Scene; Biennials; Private Collectors and Public Collections; and Diverse Artistic Voices.

Art Talks 2011 will take place in the newly-created SalÃ³n arteamÃ©ricas. This area will have theater-type seating where lectures will also be presented to the fairâ€™s attendees. Lecturers will include Carol Damian and Ricardo Pau-Llosa, among others. SalÃ³n arteamÃ©ricas will also be showing video art throughout the fairâ€™s four day run, in addition to book presentations.

In 2011, arteamÃ©ricas will introduce its NewArt section, featuring an exhibition by the Miami Art Museum. This special project will highlight works of new and upcoming artists in the Latin American art scene. In addition, the fair is organizing a curated space that will depict the violence in Central America through the eyes of artists, as well as a curated space specially created for Cuban art.