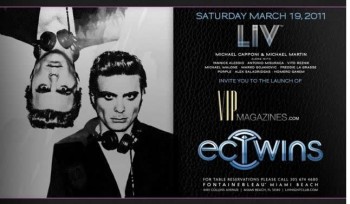 www.VIPMagazines.com , the first luxury lifestyle online magazine designed exclusively for the elite will be launched this Saturday, March 19th at LIV, Miami.

Created by Michael Martin, Miami’s most influential promoter, VIPMagazines.com will suggest its upper-crust readers only the best, most sought-after places to eat, party and shop in Miami.

‘As a promoter, I have been working closely with a very demanding, influential clientele of both locals and jet-setters who fly off to Miami for the weekend. The idea of launching VIP Magazines had been on my mind for quite some time now, because while no existing magazine really reflects what Miami has best to offer, the market is huge.’ CEO of VIP Magazines Michael Martin says.

Targeted to a wealthy audience of socialites in search of the finest, trendiest entertainment, VIPMagazines.com will later offer a premium concierge service, allowing its members to have access to the most private venues and events.

With similarly high demand from socialites from throughout the Nation, VIP-Magazine will expand to New York City and Los Angeles in the coming months, with local teams covering and developing each edition.

‘Vip-Magazines is like no other existing magazine because of its top level of quality, its concept, and its unique services to members that will follow shortly after the launch. We feel very confident that the NYC and LA versions of VIP Magazines will be very successful also’, Marketing director for VIP Magazines Elisea Nir Wolff Said.