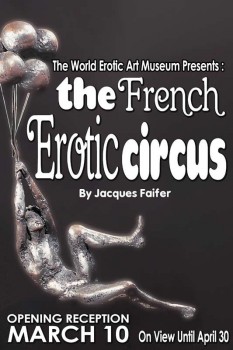 The passion and inherent fun of a young man finding his way to art clearly define the colorful paintings of the late Jacques Faifer. An artist who first saw the beginning of a life-long love of the arts in 1931 when at the age of 8 he entered a Montmartre department store drawing contest and won first prize, it was several years later that his colorful oils and sculptures were to take him to such major Paris galleries and antique stores as La Triade and Drouet on the Rue du Fauborg Saint-Honore, Les Independents at Place des Vosges, Rec on Rue Charlemagne, La Palette d’ Or and to such prominent Deauville galleries as the Royal and Danilelle Gautier.

With a life defined by World War II where he hid in a monastery in the south of France as a member of the French Resistance providing false IDs for Jewish people to escape the Nazi-occupied country, Faifer, returned to his love of painting, frequently to be found at Paris’ famed Cligancourt Flea Market area where he shared the worlds of such famed contemporaries as Alain Bonnefoit, Henry Lantier, Siniecky, Monique Morelli, Aragon, and Leo Ferre. As a true “Bon Vivant” and through his favorites themes of clowns, the circus, the carnival and, not surprisingly, erotic nudes, Faifer established himself as one of the most important and endearing artists of his time.
Exhibition on view through April 30, 2011