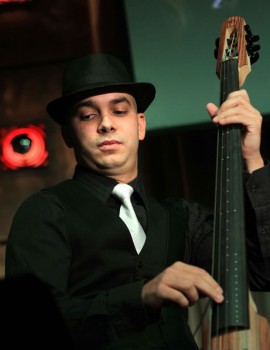 Yorgis Goiricelaya Martinez was born in the province of Matanzas, Cuba. He started his musical career in Cuba at the age of eight, with the piano. At the age of 10 he joined local Cuban bands for 2 years. Yorgis later relocated to Costa Rica where he continued his pursuit of a musical career. In 1997 he began to perform with professional local groups in Costa Rica. A year later, he began to perform with major local artists as a bassist, later as a pianist as well.

He then began to write and arrange music and joined the most recognized Cuban group in Costa Rica, Conjunto Chocolate, for which he was the manager, pianist, and writer/arranger. During this period, the group recorded 2 very successful CDâ€™s. With his growing popularity and recognition in Costa Rica he started producing music with some of the most accomplished artists in this era (1999-2005).

In the year 2004 he launched his independent music project named “Abriendo Caminos.” translated as â€œopening paths.â€ The Album was released in August of 2005 and immediately exceeded the expectations of critics. He later launched a series of concerts, which were noted as the best Cuban music concerts in Costa Rica by the Costa Rican newspaper “La Nacion.” This CD was composed by Yorgis. He also directed, produced, wrote, arranged, sang, played the bass, piano, and the flute.

When not on tour, he works daily as a bass player on Miami TV shows such as:
Pellizcame Que Estoy SoÃ±ando, Channel 41
Escandalo TV, Telefutura.
Sabado Gigante (Univision) watched in over 40 countries.
Telemundo 51

In 2010 Yorgis has released his second Album called â€œEleganceâ€ with special guest as: Paquito DÂ´Rivera, Isaac Delgado, Osmany Paredes, Tony PÃ©rez among others of Latin Jazz icons. The album is available in most of the digital music stores around the world.

Right now he is working in a new production called â€œElegance by Nightâ€. A live DVD using Elegance repertory and new songs which will be ready for the next year.