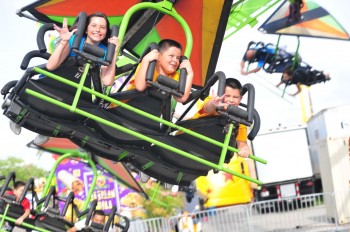 The Fair in Miami-Dade reaches its 60 year mark March 17 through April 3. Spread across 18-days, The Fair ranks as one of the largest and most successful family events in the country, offering more than half a million guests new ways of pushing the LIVE! Experience to the Next Level.

Discount Advance Sales Tickets
Fairgoers receive the biggest savings (admission, POP & rides coupons) on tickets to The Fair 2011 during the Advance Sales Ticket window. Discounts of up to $7 per person are available now until The Fair opens on Thursday, March 17th by visiting www.fairexpo.com.

The Fair Reaches Its 60th Year Markâ€¦Pushing the LIVE Experience to the Next Level! Live the Experience | March 17 through April 3, 2011. Be There – The Fair â€“ Be There.
Presented by Pepsi, Kia Motors America and Sedanoâ€™s Supermarkets, The Fair is ranked the largest fair in Florida, attracting well over half a million visitors annually.