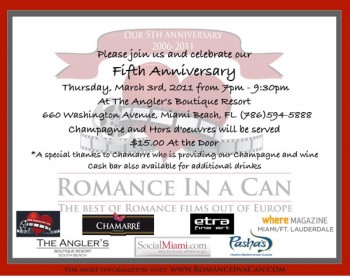 â€œRomance In A Canâ€ Film Festival, presented by Red Chemistry, Inc., has earned a reputation for bringing the finest European romance films to U.S. audiences since 2006. This year, the film festival will run from May 5 to May 10, with a kick-off event on March 3 at the Anglerâ€™s Boutique Resort in Miami Beach at 7:00 p.m. The event will feature screenings of short films, hors dâ€™oeuvres by the Anglerâ€™s Boutique Resort and ChamarrÃ© wines (event cost is $15). Romance In A Can will showcase its film program at various locations including the Colony Theater, Miami Beach Cinematheque, Miami Beach High School, Alliance Francaise, Coral Gables Art Cinema (in collaboration with the Video on Demand Channel eurocinema) and FIU South Campus.

Furthermore, Romance In A Can is the only film festival dedicated to the screening of European romance films in North America. Since its inception in 2007, Romance In A Can has exposed U.S. and Hispanic audiences to a number of unsurpassed films from the best and brightest movie makers in the European film market such as I Am Staying starring Sophie Marceau, Escuela de Seduccion with Victoria Abril, Mujer Invisible with Maria Bouzas and many more. This year, the festival will screen films from over ten European countries including France, Italy, Spain, Germany, Israel and others, which are traditionally shown during opening and closing night.

About the film programming: During the 2010 Cannes Film Festival, ACID (Association for the Distribution of Independent Cinema) presented a selection of 9 acclaimed international full-length films including Into Our Hands, Cuchillo De Palo, Donoma, Fix Me, Flowers of Evil, Chicks, Pursuit, Robert Mitchum is Dead and The Drifter. This year, Romance in a Can has the pleasure of presenting the same 9 feature films from the ACID Cannes selection in Miami. Created in 1994, ACIDâ€™s mission is to give visibility and public release to new talents in the film industry. ACIDâ€™s support does not stop after the presentation in Cannes. In partnership with 35 festivals, ACID presents movies in France (Paris, La Rochelle, Lussas, Pau, Belfort) as well as abroad (Montreal, Bratislava, TÃ¼bingen, Linz, Prague, Lisbonne, Pesaro) and now Miami.

Roamnce In A Can also embraces Miamiâ€™s cultural arts by giving back to the community through Red Chemistry, Inc., a non-profit organization that raises funds for local youth art programs. Each year, Red Chemistry sponsors a short film competition with local film students from Miami Beach Senior High School and international film students. This yearâ€™s theme is â€œFor The Love Ofâ€ and the awards ceremony will take at Miami Beach Senior High School on Friday, May 6 at 7:30 p.m. A jury of professionals from the movie industry will review films made by European film students as well as films produced by local MBSH students. Awards and cash prizes are given each year during the ceremony. The best films will be purchased by eurocinema and aired on their on-demand channel.