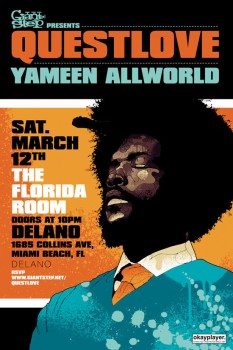 It was so good last year we decided to do it again! Questlove takes over the DJ booth for one very special night during Winter Music Conference. MC Yameen Allworld will be joining him on the mic and, this being an exclusive Miami appearance for those two, you know the room will be jumping. Join us on Saturday, March 12th, as Giant Step Presents DJ Questlove and MC Yameen Allworld at The Florida Room at Delano for a night you don’t want to miss.

Entrance is free but strictly RSVP only.

Amir “Questlove” Thompson is perhaps one of the best known living musicians who is not the lead singer of a band. He broke onto the scene as the founder and drummer of the hip hop band The Roots in the mid 1990s, but his love affair with music began at a very early age. The son of touring musicians who didn’t want to leave him behind as a young child, Questlove grew up on a steady diet of doo-wop, tour buses, and backstage passes. He began performing at his parents shows by the age 7 and was the musical director by the age of 13. He established The Roots by the time he was in high school and the rest is history as they say.

As a drummer and producer he has worked with nearly everyone, from Erykah Badu, Jay-Z, N.E.R.D, to Fiona Apple, Dilated People’s, and Common just to name a few. As a DJ he has released the compilation Questlove Presents: Babies Making Babies and played more venues than we have time to list.