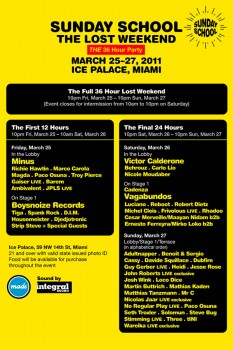 Sunday School: The Lost Weekend in Miami is shaping up to be larger than life this year, with the Minus crew featuring Richie Hawtin, the Boysnoize Records gang with Tiga and special guests, and the Cadenza Vagabundos with Luciano previously announced. And now, the party is about to get even bigger with the addition of Guy Gerber, Heidi, Jesse Rose, John Roberts, Loco Dice, Paco Osuna, Rhadoo, Three, tINI and Wareika to 36 hours of madness and mayhem at Ice Palace from Friday, March 25th to Sunday, March 27th, 2011.