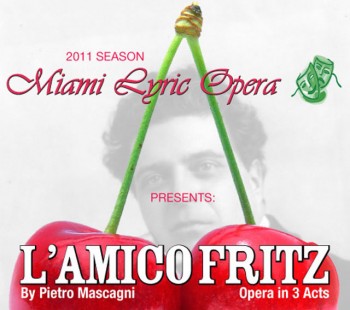 Admission: $30. $25 for Students with ID at the Box Office. Tickets at Colony Theater Box Office, online at www.miamilyricopera.org or Ticket Master

The story in a small Jewish community in Alsace by the end of 19th Century. Mascagni chose a French comedy by Emile Erckmann and Alexandre Chatrian, L’Ami Fritz, which had been published in 1864 and adapted for the stage in 1872. The story was further transformed into a libretto by P. Suardon (an anagram for the famous writer, N. Daspuro), who maintained the fundamental ingredients of the original: Fritz Kobus, a wealthy, confirmed bachelor, lives on his estate in Alsace. The Rabbi David a persistent matchmaker is determined to get Fritz to marry. He bets that one day he will also marry Fritz. Affirming that he will never get married, Fritz bets with David offering his vineyard that it would never happen.

Partly through David’s plotting, Fritz falls in love with Suzel, the daughter of his steward, and asks her to marry him.

In a beautiful morning Suzel hands to Fritz some fresh cherries and both engage in one of the most beautiful Duet ever written where the feelings of each one are expressed. Finally one day Fritz reveals his feelings for Suzel and the two admit their love. David enters and declares that he has won his wager with Fritz, telling him that he is going to give his winnings, Fritz’s vineyard, to Suzel as a wedding present.