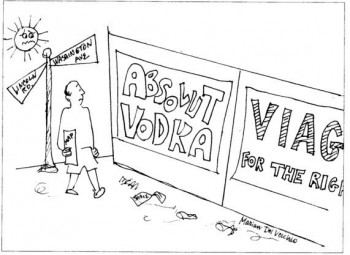 THE ISSUE:
Once again, a proposal to allow full-window signage in store windows has been proposed and will be considered by the Miami Beach City Commission.

The proposal would weakening and liberalize the city’s proven signage laws and seriously harm Miami Beach’s unique character by allowing billboard-sized ads in store windows AND OPEN THE DOOR FOR BILLBOARDS TO BE ERECTED ON THE TOP OF BUILDINGS ALL OVER MIAMI BEACH.

The proposal will be discussed at the Miami Beach Commission’s Land Use and Development Committee meeting on Monday, January 31, 2011. The meeting will begin at 4 PM in the 4th Floor Conference Room.

The justification for weakening the law is that it will allow the city to raise additional revenue by charging a fee for the signage. However, raising minimal additional revenue is not a reason to sacrifice the special appeal that brings residents and tourists to Miami Beach.

Our unique design and architecture allows Miami Beach to stand out from all the other cities in Florida – and indeed the entire nation. Allowing offensive signs to proliferate would drive away the very people who pay real estate taxes, spend money in stores, hotels and restaurants and pump our economic engine.

As originally proposed two months ago, the new law was intended to help landlords defray costs of vacant stores and cover empty store fronts. But that would mean landlords would have reduced incentive to fill the empty stores since they would be earning high additional revenue from the giants signs.

Now, the City Attorney and outside counsel have reviewed the proposal. Their opinion: allowing billboard-sized ads in windows would open the door to challenges to the city’s ban on ANY billboards or giants signs. Hungry landlords could legally justify erecting giant, illuminated signs all over town. Such signs would loom over the streets, destroy the skyline and ruin the character of Miami Beach.

WHAT YOU CAN DO:
Attend the Commission’s Land Use and Development Committee meeting.
When: Monday, January 31, 2010 at 4 PM.
Where: Miami Beach City Hall, City Manager’s Large Conference Room, 4th Floor.

Please send your emails as soon as possible. And please pass this on to as many friends as you like!

Don’t allow our the special character of Miami Beach to be cheapened by large-scale billboard advertising.

MDPL is the oldest Art Deco Society in the world.