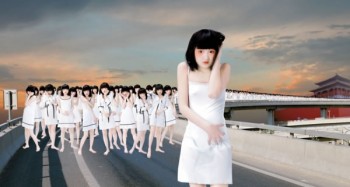 ART LEXÃNG unveils the new year 2011 with a group show:

“The lotus flower is one of the most profound symbols of femininity in Asian culture. In Buddhism, the lotus symbolizes Bodhi, the state of total mental purity and spiritual perfection, as well as the womb or embryo of the world. The lotus grows in muddy water and rises above the surface to bloom with re…markable beauty. This pattern of growth parallels the spiritual journey of the modern woman, emerging from the primeval mud of materialism, cleansed by the waters of experience, and ultimately ascending into the bright sunshine of enlightenment. Unhindered by her murky beginning, the lotus, like the a woman awake to herself, rejoices in the purity, divinity, and spiritual growth of her personal evolutionâ€

Artists Bo Yun, Cui Xiuwen, Maleonn, Wang Xiaojin and Ye Hongxing illustrate contrasting experiences in the life of the Lotus/Woman. These reflections are contemporary and ancient, reflections of modern times and the mysterious traditions of the Ming dynasty in China. Their works represent inspiring commentary on critical issues affecting todayâ€™s woman, including romantic love, transcience, self-discovery, youthful pregnancy…and life itself.

The exhibition of Growing pains of a lotus opens on Wednesday January 26th and ends on February 25th.

Bo Yun â€œMid summer lotusâ€, 2009
Bo Yun is one of the founding members of the momentous â€œStar Groupâ€, together with ten other prominent Chinese artists including Ai Weiwei. In 1979, â€œThe stars groupâ€ shattered the stranglehold of Communist Party orthodoxy and set the stage for the future freedom of artistic expression in China. His semi-abstract compositions of landscapes at dawn or dusk have a tranquil, dreamlike serenity reflective of traditional Asian perspectives entangled with shades of pathos and emotion. Bo Yunâ€™s works appear in The Rothschild Family and Deutsche Bank collections, among many others.

Maleonn, â€œDays on the cotton candyâ€, 2005
Maleonn is a talented Shanghai photographer who has gained a cult following with his fable-driven work. In 2008, four of Maleonnâ€™s works from his â€œDays on the Cotton Candyâ€ were curated into a major exhibition called â€œChina Design Nowâ€, at Londonâ€™s Victoria & Albert Museum. One of those works was selected for the honor of appearing as the two-page frontispiece of the book published by the V&A Museum to coincide with the exhibition.

Cui Xiuwen, â€œAngelâ€, 2006
Cui Xiuwen is among the best known female artists in China. Her works have been collected by Centre Pompidou in Paris and have appeared numerous times in major museums around the world, including the MOMA and the prestigious Tate Modern in London. Her â€œAngel Seriesâ€ combines adult themes with teenage innocence as she portrays a young girlâ€™s experience growing up…a process which, in the eyes of Cui Xiuwen, is no less stressful and difficult despite the progress women have had in society.

Wang Xiaojin, â€œTwo ladies in an opium bedâ€, 2008
Unlike many contemporary Chinese artists who are attracted by all things modern, Wang Xiaojin is a modernist driven and inspired by the distant past, particularly its women and artistry. Critics claimed that Wang Xiaojinâ€™s artworks have best captured the mood of a bygone era that was altogether most refined and conservative and a time when being â€œfeminineâ€ typified a womanâ€™s existence. Possessing a neoclassical position within contemporary Chinese artists, Wang Xiaojin crosses chronological boundaries in his work, challenging us to see the new in the old…and the old in the new.

Ye Hongxing â€œBrilliant Color â€“ Love Infatuation No.8â€, 2010
Ye Hongxing employs traditional Chinese motifs and flower patterns in her attention-grabbing fusion series. By combining the traditionally Western medium of oil paint together with Chinese decorative patterns, the result is a striking amalgam of modern Western technique melded with a distinctly pan-Asian feel. Each painting in this series is an alluring self-portraits in which her face — with eyes closed â€“ rises transcendentally behind bright winding floral patterns. The peace projected in her face is unmistakable, a Zen-filled ocean of harmony contrasting with the lush, vibrant flowers and vines characteristic of luxurious porcelain dishes.. The artist claims that her particular form of fusion is her reaction to the â€œswift change of Chinaâ€™s social systemâ€.