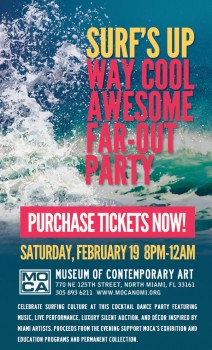 The excitement is growing for MOCA BASH Surfâ€™s Up, the Museum of Contemporary Artâ€™s annual cocktail and dance party. This year, the MOCA BASH celebrates the thrill of surfing. On February 19, guests will enjoy live entertainment, cocktails, hors dâ€™oeuvres, and dancing in imaginative settings designed by Miami artists which evoke surf culture from South Florida to the South Pacific.

Tickets to MOCA BASH Surfâ€™s Up are $150 in advance, $175 after January 21 and may be purchased by calling 305 893 6211 or visiting www.mocanomi.org. Proceeds will benefit the museumâ€˜s public programs and art acquisition fund.

To launch the event, MOCA will host a kick-off party Thursday, January 13 at The Catalina Hotel & Beach Club, 1732 Collins Avenue in Miami Beach. Complimentary GREY GOOSE Vodka cocktails, hors dâ€™oeuvres and music will be offered from 8 to 10 pm while guests have the chance to purchase the advanced priced tickets.

The MOCA BASH Surfâ€™s Up Silent Auction will offer a fantastic array of items and opportunities including original artwork by Raymond Pettibon, Daniel Arsham, and Russell Crotty; surfing lessons and 2 night stay at Hans Headman Surf School in Honolulu, Hawaii; 3 nights at Ollie’s Surf Camp in Tamarindo, Costa Rica; hotel stays at the Taj in India, Rustic Inn in Jackson Hole, WY and Villa D’Este on Lake Como, Italy; VIP passes to The Armory Show in New York and Art Basel Miami Beach; dinner for 8 prepared by the chef from STK; and a tour of Wynwood galleries with MOCA Director Bonnie Clearwater. Bidding will be available online after January 10 at www.mocanomi.org/cmarket.

MOCA BASH Surfâ€™s Up builds on the excitement of MOCAâ€™s previous benefits: Bohemian Bash, POP Love, POP Soup, POP 10, POP 8 Â½ and POP Bollywood which all raised funds for the museumâ€™s Permanent Acquisition Fund and MOCA Programs. Over 800 guests are expected to attend.