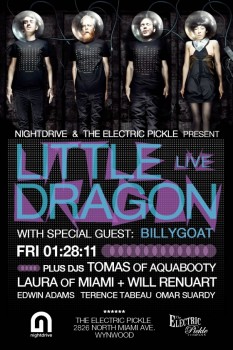 Just off their world tour with Gorillaz. Debut Miami performance!

“They might be called Little Dragon, but this Swedish electro-pop group makes music thatâ€™s anything but small. From the spun sugar with soul of â€œMy Stepâ€ to the Mariah Carey-meets-Friendly Fires tweeting tropical beat of â€œRunaboutâ€, pop perfection comes naturally to this four-piece” – Nylon Magazine

“The band from Gothenberg has been revolutionizing the pop scene since their first self titled album. At first listen, Little Dragon seems like so much more than a pop band. With absolutely amazing and soulful vocals from lead singer Yukimi Nagano and sometimes trippy synth sounds you can sometimes forget you are listening to Pop. Their ability to blend catchy and interesting were displayed on their first album and they continue to do this with Machine Dreams, an album that harvests the electrifying energy of their live performance.” – URB Magazine

“Based in Gothenberg, Sweden and signed to British label Peacefrog, the fact that Little Dragon can tour in North America with only two studio albums under their belt — and limited radio airplay — is a testament to their viral popularity.” – NBC Washington