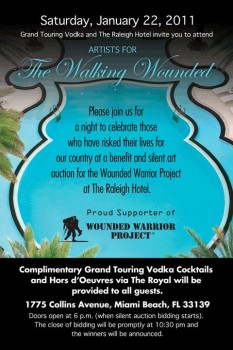 On January 22, 2011, from 6pm to 12am, Erich Neumann and Diamond David Lee will be hosting, along with the below listed sponsors and contributors, (including local artists and DJs), a fundraiser and silent auction for the The Walking Wounded Charity to benefit the veterans and families living with injuries suffered from our foreign wars. The location for this event will be at the Raleigh Hotel, 1775 Collins Avenue, Miami Beach, FL 33139. The Raleigh has generously donated their time, property and staff as they believe in this event and feel that it is a noble cause.

THE EVENT:
This event will be held in the “Oasis” section of the Raleigh Hotel located in the quaint sand portion of the eastern side of the property, due to the fact that there will be a “live mural” being created on canvases hung laterally, suspended via the palm trees to create an artificial wall. The benefit will consist of the artists working on the mural, while having live DJ and video performances. There will also be several other young Miami artists showing their original pieces (some donated for the silent auction) during the event. This will be much more than a simple, live performance mural, rather it will be a venue to raise awareness to those who have literally laid down their lives for us and our country and a celebration of all of the freedoms for which they sacrificed. Every artist, DJ, and contributor of this event believes in this cause, as they understand the importance of highlighting the service of those who have freely have given their lives and bodies for our country.

All of the participating artists are donating their time and art for this event and silent auction, which will be held between 10:30pm, and 11:30pm. Bidding for the donated pieces will start immediately once the doors to the event open at 6 pm. However, the live mural by MSG Cartel (the oldest, most acclaimed and still operating tag/graffiti crew in Miami and surrounding areas) and a special done by a triumvirate of celebrated artists known as FeCuOp (Brandon Opalka, Jason Ferguson, and Christian Curiel) will be created â€œliveâ€, during this event. This will serve as an expose to the raw artistic talent that Miami has to offer, musically and artistically, and the monies raised from this performance will directly be given to the Walking Wounded Charity. This event will be curated by Fritz Romeus.

The musical atmosphere and live video performances will be provided by DJ Andrews Lorenzana and DJ Chris Video, respectively. (They are both regarded as up and coming visual and musical artists in Miami and abroad.)

Those that want to be exposed to young artists and support the soldiers of our foreign wars are encouraged to attend and enjoy the beauty of what the Brilla Group has done to drastically beautify the Raleigh Hotel and Miami Beach. Through hard work and determination, they have made this Miami Beach landmark into the “Jewel” of South Beach once again. A special thanks again to Adam Cohen, Debra Erber and the rest of the Brilla Group and Raleigh staff for the vision and the belief in this benefit!

This property has underwent a major renovation and has added a new restaurant, The Royal, that is currently (and for good reason) enjoying immediate success, due to the expert vision of the acclaimed chef, John DeLucie, from NYC’s The Lion and the Waverly. http://www.raleighhotel.com/dining/raleigh_restaurant/. The restaurant is a direct reflection of the new ownership, management and staff, as they are vibrant, driven and have a singular vision: To Create Excellence, which, they have and continue to do on a daily basis.