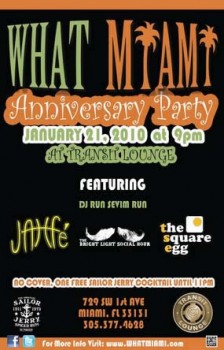 What Miami (http://www.whatmiami.com) will be celebrating its one year anniversary this upcoming January 21, 2011 at Transit Lounge in downtown Miami starting at 9pm.

Come join What Miami, Jahfe, Bright Light Social Hour, DJ Run Sevim Run, The Square Egg, and Transit Lounge as we put together an unforgettable night to celebrate one year of What Miami fun.

Enjoy both indoor and outdoor entertainment, anniversary drink specials and of course, no cover!

About Jahfe:
Jahfe is a band based out of Miami, Florida playing a heavy yet smooth fusion of roots reggae with rocking dub-hop. Representing the power of the youth and the wisdom of roots culture, the music of Jahfe not only reflects the city’s diverse music scene but also the true ability of conscious music to connect to people of all backgrounds. Band members represent a diverse international background of home countries and cultural roots- Haiti to Spain, Israel to Cuba, Czech Republic to Morocco to all over the US.

Named ‘Best Indie Band’ at the 2010 Austin Music Awards, the Central Texas-raised young men of The Bright Light Social Hour have built their growing reputation through several EPs and exhilarating widely-acclaimed live shows, including the 2009 Austin City Limits Festival. In culmination of their long, studied development, the band is released their debut full-length album, simply titled “The Bright Light Social Hour”. Recorded in five studios around Austin during summer 2010, the album is founded on sun-drenched optimism, raucous youth, and an innovative brew of American music of varying types – classic rock, contemporary indie, rhythm and blues, dance, and soul. Producer Danny Reisch of Good Danny’s utilized the best elements of vintage and modern recording to achieve a sound both forward-looking and evocative of 1970s hi-fi.