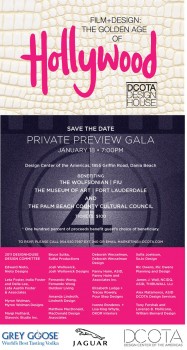 Design Center of the Americas VIP preview gala celebrating the debut of the cultural giant’s new glamorous showcases DesignHouse l Film+Design: The Golden Age of Hollywood and Greg Gorman: A Distinct Vision 1970-2010. Held at DCOTA on Tuesday, January 18 and beginning at 7:00 PM, the gala is slated to be the premier design event of 2011 and will be attended by the “who’s who” of Miami, Palm Beach and Broward, including celebrity photographer Greg Gorman and featured designers from South Florida’s top firms. 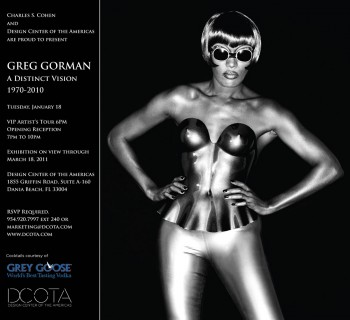 DesignHouse l Film + Design: The Golden Age of Hollywood showcase features nearly 20 breathtaking installations reminiscent of iconic films of the influential era. In following the Hollywood theme, Greg Gorman, who is best known for his celebrity portraits and nudes, will debut his 200 piece retrospective exhibition, Greg Gorman: A Distinct Vision 1970-2010.

Tuesday, January 18, 7pm
The Wolfsonianâ€“FIU is very excited to be one of the beneficiaries of the 2011 Design Center of the Americas (DCOTA) DesignHouse, which will feature nearly twenty breathtaking installations reminiscent of iconic films that influenced a universal culture and transformed a way of life. The topic forges a dialogue between the creative disciplines of film and design and reveals the visual impact that environments have in telling a story.

The VIP preview and gala will be held on Tuesday, January 18 at 7pm in DCOTA’s Atrium and DesignHouse to celebrate the debut of the showcase. A 200-piece retrospective by Hollywood photographer Greg Gorman, Greg Gorman: A Distinct Vision 1970-2010, will also be open for viewing during the festivities. Please visit www.dcota.com for more information.

Tickets for the event are $100 per person and 100% of the proceeds will benefit The Wolfsonian. Please call 954.920.7997 xt. 240 or marketing@dcota.com to purchase your tickets, and don’t forget to specify The Wolfsonian as the beneficiary of your choice!