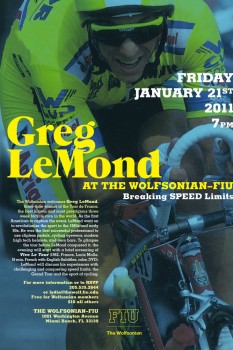 Please join The Wolfsonianâ€“FIU on Friday, January 21 at 7pm for a screening and public talk with Greg LeMond, three-time winner of the Tour de France. The evening begins with the screening of Vive Le Tour, a glimpse of the tour before LeMond conquered it. Following the film, LeMond will share his views on challenging and conquering speed limits through his experiences with the tour and his years at the top of the cycling world.

The evening kicks off with a screening of the short documentary Vive Le Tour (1962, France, Louis Malle), which gives a glimpse into the Tour de Franceâ€”the most prestigious and demanding three-week bicycle race in the world. Immediately following the film, LeMond will hold a talk with the audience, sharing his views on what it is to challenge and to conquer speed limits from the unique perspective of one who has not only survived the Tour but has won it. As the first American to capture the event, LeMond revolutionized the sport in the 1980s and early 1990s. He was the first successful professional to use clipless pedals, cycling eyewear, modern high tech helmets, and aero bars.

Greg LeMond: Breaking Speed Limits is presented in conjunction with Speed Limits, an exhibition on view at The Wolfsonian that explores the powers and limits of the modern era’s cult of speed and celebrates the hundredth anniversary of Italian Futurism, whose 1909 manifesto proclaimed that “the world’s magnificence has been enriched by a new beauty: the beauty of speed.” The exhibit, on view through February 20, 2011, is jointly organized by The Wolfsonian and the Canadian Centre for Architecture (CCA), MontrÃ©al and includes more than two hundred objects from the two institutions.