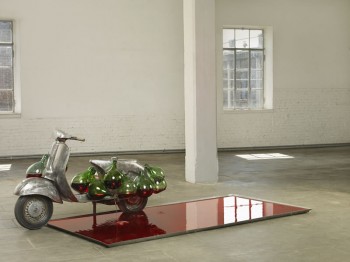 Gran Torino, curated by Paolo Facelli and Francesco Poli, presents works from a selected group of Torino artists that are representative of not only the local but Italian situation, with their own national characteristics, in an open and stimulating debate with the international scene. Gran Torino will feature artists who have established themselves during the past 15 years along with works by artists representative of generations that emerged during the 60s, 70s, and 80s. It begins with Torino exponents of the renowned Arte Povera movement, such internationally acclaimed artists as Mario Mertz, Alighiero Boetti, Giulio Paolini and Michelangelo Pistoletto, and introduces significant trends and movements of contemporary Italian art to American audiences.

The Gran Torino artists focus on the concepts of duration and continuity and the relationship between art and time. While tracing different worlds and visions over a period of 40 years, each artist displays singular intentions, reflections and experimentations within a common social, political and cultural matrix.

A founding force in the Arte Povera movement, Michelangelo Pistoletto has created works during the last sixty years that unwaveringly reinvented the contemporary art aesthetic. Pistoletto is perhaps most regarded for his Mirror Paintings, which directly include the viewer and real time in the work. Interestingly these works embraced perspective, much as it had been during the Renaissance, thereby countering the twentieth-century avant-garde aversion to such artistic devices.

Gran Torino will provide visitors to the Frost Art Museum a significant opportunity to view and experience the Italian avant-garde of the latter part of the 20th century. It will allow visitors to hopefully gain a richer understanding and appreciation of twentieth-century Italian avant-garde and the Arte Povera style, which continues to significantly impact the city of Turin and the art world.