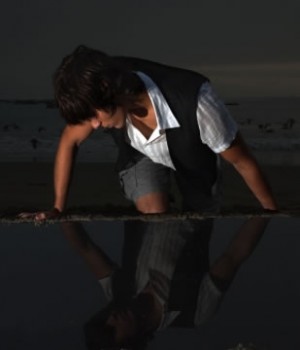 Dina Mitrani Gallery is pleased to present an exhibition of recent work by Peruvian artist Roberto Huarcaya. This is the first solo exhibition for the artist in the gallery, and in Miami. The selection of images in the exhibition have not been shown in the United States and were only exhibited briefly in Paris during Mois de la Foto 2010. On view are two separate series, one which appropriates well known images painted during the Renaissance by masters such as Da Vinci, Carravagio, and Bosch. These are modern day portraits and scenes with a contemporary Peruvian twist. The other series are large format panoramic seascapes, one of which recently won the Petrobras Award in Buenos Aires.

Huarcaya was born in Lima in 1959, studied psychology and cinema before he traveled to Madrid to study photography in 1989. Since then he has been teaching photography and subsequently founded the Centro de la Imagen in Lima in 1999. His artwork has been exhibited around the world in solo and group exhibitions and he has participated in the 6th Havana Biennial 1997; Lima Biennial 1997, 1998 and 2000; Primavera FotogrÃ¡fica of CataluÃ±a 1998; PhotoEspaÃ±a 1999; 49th Venice Biennial, 2001; in Polyptychs at the Center of Contemporary Art, Seattle, 2007; Dialogues at the Museum of Latin American Art of California in 2009 and in the Mois de la Photo 2010 in ParÃ­s.

His work is included in the collections of the Maison EuropÃ©enne de la Photographie of Paris, the Fine Arts Museum of Houston, the Museum of Latin American Art of California, the Center of Contemporary Art in Seattle, the Lehigh University Art Collection, the Museo de Arte de Lima, the Museo de San Marcos in Lima, the FundaciÃ³n AmÃ©rica in Santiago, Chile, the Centro de Arte ContemporÃ¡neo Wilfredo Lam in Havana, Cuba and many private collections.

Dina Mitrani Gallery opened in November 2008 and specializes in international contemporary photography. The gallery represents emerging and mid-career artists, offers artists talks and lectures on photography as well as photo-based books. The gallery is committed to promoting its artists, as well as working with independent curators to produce unique group exhibitions.