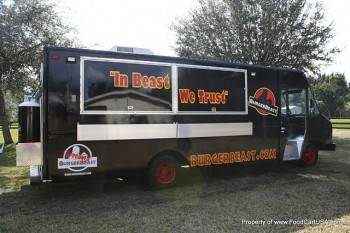 Starting Friday January 7th, Street Food Fridays brought to you by presenting sponsor LaLey Enterprises in partnership with The Miami Herald/El Nuevo Herald and Burger Beast will happen. Street Food Fridays will take place the 1st Friday of every month.

The Burger Beast truck will be featuring all his favorite restaurants and chefs to cook on it. South Florida is big and not everyone is going to drive around and try food all over the place. Iti s going to bring places like Charm City Burger Company, Georgie’s Alibi, Gilbert’s 17th Street Grill and Quickie’s of Hollywood to Miami and ocations from Miami like 8 oz. Burger Bar, Burger & Beer Joint, The Filling Station, and John Martin’s Irish Pub farther north.

The unveiling of the truck is at Street Food Fridays at the Miami Herald. Unfortunately, they will not be cooking on the truck but Fireman Derek will be selling some of his world famous pies. Good stuff if you’ve never had it. The cooking debut will be next Thursday, January 13th and will feature Ortelio Cardenas, better known as El Mago De Las Fritas.