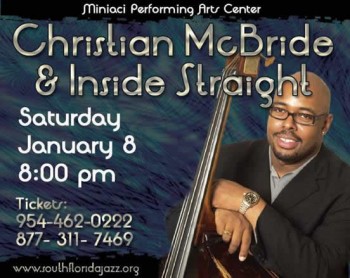 South Florida JAZZ welcomes arguably the most important bass player in jazz, Grammy-winner CHRISTIAN McBRIDE who will appear with his band INSIDE STRAIGHT for the first time in Florida.

South Floridaâ€™s premier modern jazz organization is privileged to feature Christian McBride and Inside Straight. Mr. McBride is at the zenith of modern acoustic and electric bassists. Best known as a jazz musician, he also is in tremendous demand in several genres. This concert takes place at the 500-seat Rose & Alfred Miniaci Performing Arts Center on the Nova Southeastern University campus, 3100 Ray Ferrero, Jr Blvd in Davie 33314. Tickets are $40 ($30 for South Florida JAZZ members and $15 for students under age 25 with I.D.) and may be purchased from the Broward Center Box Office by calling 954.462.0222 in Broward County; also toll-free at 877-311-SHOW, as well as online at: southfloridajazz.org, the presenting organizationâ€™s official Web site.

Bassist Christian McBride is one of those bigger-than-life artists that just burst onto the music scene seemingly in full bloom. His father and great uncle, both well-known Philadelphia bassists, mentored him early. By his 21st birthday, he was a remarkably mature player and rapidly became everyone’s favorite young acoustic bassist of the 1990s and then the 2000s. Christianâ€™s huge sound and prodigious technique, both with plucked and bowed solos, recall the legendary Ray Brown and particularly Paul Chambers. More importantly, his solos evoke the melodic lines of a horn player. He actually started on electric bass when he was eight and took R&B gigs in high school, but by then he was getting more interested in jazz and playing the acoustic bass.

McBride studied at Juilliard (starting in 1989) and then played briefly in the bands of Bobby Watson, Benny Golson, Roy Hargrove, and Freddie Hubbard. He toured with the Benny Greenâ€™s trio, played duets with Ray Brown at the 1994 Monterey Jazz Festival, and recorded his debut as a leader for Verve before touring with his own group in 1995. Beginning with A Family Affair in 1998, McBride began opening up his sound and incorporating more of the pop, funk, and fusion styles he grew up with. This approach continued through such albums as Sci-Fi and Vertical Vision. Having jumped labels from Verve to Warner in the early 2000s, McBride made yet another label change, releasing the more straight-ahead New York Time on Chesky in 2006. In 2009, McBride returned with an equally straight-ahead set of mostly all original tunes, Kind of Brown with this current band, Inside Straight.

He is undoubtedly the most widely recorded and requested bassist in contemporary music. It is not only in the jazz world that Christian McBride has left his mark. An equally adept electric and acoustic bassist, he has recorded with Sting, Queen Latifa, DJ Logic, Diana Krall, and classical vocalist Kathleen Battle. In the last few years, he has become the regular bassist for Pat Metheny and recurrently plays with Chick Corea in Five Peace Band and Chickâ€™s new trio with drummer Brian Blade. Further, he just left the position of Creative Chair for Jazz with the Los Angeles Philharmonic Orchestra, relinquishing it after four years to Herbie Hancock. Christian is co-director of the National Jazz Museum in Harlem. And he is still in his thirties.
Inside Straight is a band composed of five exceptional players. The front line features the superb alto saxophonist Steve Wilson and rising-star vibraphonist Warren Wolf, Jr. The rhythm section is solid with creative pianist Peter Martin, who came to prominence with saxophonist Joshua Redman, and the veteran, hard-swinging drummer and long-time CMcB collaborator, Carl Allen. Chris, of course, drives the band like no bass player since Ray Brown.