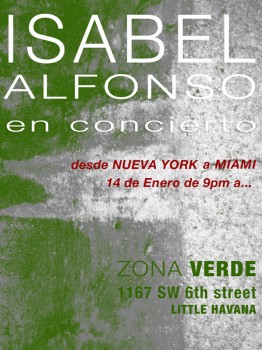 Isabel Alfonso is a Cuban cantautora (singer/songwriter.) She has made a fusion of Cuban Nueva Trova with Cuban Son (Buena Vista Social Club) and Boleros, in her own experimental way. Isabel, is a professor of Latin American Literature in NYC at St Joseph and a writer during the day and a local NYC musician at night, performing in various city pubs and bars.

Alfonso joins Terraza CafÃ©â€™s impressive roster of Latin Jazz and experimental musicians every first Tuesday, so catch her now before you canâ€™t get into Carnegie Hall because the tickets are sold out. Isa Alfonso is a renasaince woman, making moves that will surely go down in musical history. When you mix influences like Thelonious Monk, Silvio Rodriguez, and Nina Simoneâ€¦forget it!

Isa is a slamminâ€™ musician, composer and can school your ass in Spanish Literature any day. Isaâ€™s got it going on with a serious list of accolades, including: a PhD, recordings and performaces with Roberto Poveda, being one of the founding members of the She Said Project, and Isa and is now recording InCubismos, her first solo album to be released next year.

Don’t miss the opportunity of listening to her music live in Miami. It is a one night performance only, in beautiful ZONA VERDE, at the 12th & Six Art Complex in Little (LiHa) Havana.

Isaâ€™s music can be found on-line by clicking here.

This event is produced by artist/filmmaker Adalberto Delgado of the 6th Street Container alternative space.