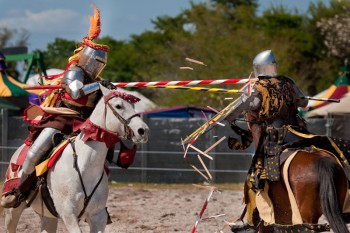 After a year away from pillaging their village, King Ferdinand and Queen Isabella rejoice with joy over regaining their kingdom in Miami, as the Florida Renaissance Festival returns for their second conquest at Historic Virginia Key Beach Park in Miami. The Miami festival weekend dates are January 15th to January 23rd, 2011, including Monday January 17th for Martin Luther King Day, at Historic Virginia Key Beach Park.

With the Florida Renaissance Festival returning to Miami, along come new and exciting acts combined with last yearâ€™s favorites to delight event attendees throughout the festival. These include: Gabriel Q – bizarre and hilarious big puppets and stilt characters that consist of Giant Butterfly, Caterpillar, Baby and The Queen of Hearts on her high white horse and many more. Faire Stories represents the blending of the magic and enchantment of traditional fairy tales, the joy and exuberance of Broadway music, and the unique interactive experience offered by Renaissance faires. Peter Suarez, aka â€œManolete,â€ a world renowned dancer brings his many styles for the Miami show. He had the distinction of being the only dancer ever hired to perform a live solo with the Gipsy Kings at Radio City Music Hall. The Tortuga Twins, are a multi-talented team boasting an extensive performance background with more than 30 years of comedic audience participation and improv experience to entertain all and much more.

This 16th Century production features more than 100 costumed performers, five stages with continuous entertainment and stage acts from around the world.

During the family themed weekends, guests will enjoy jousting tournaments three times a day, hearty food, human powered rides and games for children that include the Worldâ€™s Largest Rocking Horse, Giant Chess, Barrel Rides, and games of strength and skill.

The festivities will feature historical reenactments, sword fights, magical illusions and an abundance of authentic fare from freshly made kettle corn to roasted giant turkey legs, which can be washed down with a swig of mead or ale.

The Florida Renaissance Festival is produced by the national, award winning Bobby Rodriguez Productions and strives to create an entertaining and cultural opportunity by making Renaissance history come to life for both children and adults. The event is hosted by City of Miami Parks and Recreation Department and Historic Virginia Key Beach Park.

The Florida Renaissance Festival at Historic Virginia Key Beach Park will be open weekends from 10 a.m. to sunset. Prices range from $20.00 for adults and $7 for children ages six to 11 years old and children under five are free. Pre-show discount tickets are available online at www.ren-fest.com. Deerfield Beach show dates are February 12th through March 13th, 2011.