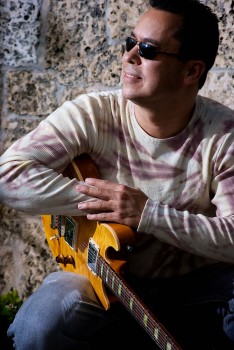 Guitarist Rolando Grooscors is a rare find on today’s jazz scene: a unique voice that strengthens and expands the jazz idiom with sensitivity, clarity, and uncompromising integrity. Rolandoâ€™s warm, expressive tones and impeccable phrasing have been delighting audiences wherever he goes.

A two-time Latin Grammy nominee, Rolando Grooscors was born in Caracas, Venezuela. His love for Brazilian music motivated him to start different projects where Brazilian music was infused with
Latin and Jazz influences. Here he
began to develop a Jazz/Fusion
style. The experience greatly influenced Rolandoâ€™s musical development.

Leading his own band, Rolando has
recently released his debut CD, â€œTHANKFULâ€. The band is a sextet including Piano/keyboards, Bass, Sax/wind controller, drums and percussion.

His compositions have been called
â€œmasterfulâ€ and with the attention
already received, Rolando is pushing
himself to have his voice defined in
music, both as a sideman and as a
band leader.

â€œRolandoâ€™s guitar playing is on another level, Yet on this higher plane, Rolandoâ€™s soulful, creative, twelve-tone improvisatory style is always completely accessible and joyous. Rolando displays a wide variety of styles and concepts with his harmonic and melodic imagery
capturing the essence of musical
freedom, spirit and sensuality.â€ –: Darryl Tookes