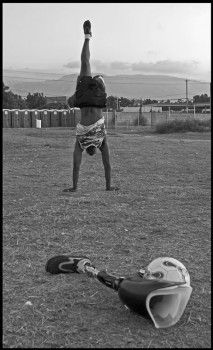 Exactly one year after the Haitian earthquake, Wednesday, January 12, 2010 will mean a solemn day of personal reflection for the students, faculty, and alumni of Archbishop Curley Notre Dame. Their day will begin with prayers of remembrance for families and friends who perished and an extended hand of support for the displaced students who have found a new home at ACND. The community and media are welcome to participate in the dayâ€™s events and free docent led tours of Carl Justeâ€™s and Andre Chungâ€™s exhibit â€œInvictus: Haiti Unconqueredâ€ will be offered throughout the day beginning at 9:30 a.m.

Award-winning photojournalists of the Iris PhotoCollective, Juste (ACND alumnus) and Chung exhibit photographs from their latest project, â€œInvictus: Haiti Unconquered.â€ This series of images document the tragic unfolding of events following the devastating 2010 earthquake. Inspired by William Ernest Henleyâ€™s iconic poem â€œInvictus,â€ the last image presented titled â€œLeg Upâ€ shows a manâ€™s prosthetic leg at the foreground of the image as if tossed into the hands of the viewer while a leg-less man proudly shows off his handstand skills. An arid field of dead grass surrounds him. The countryâ€™s natural beauty of gray mountains and shadowy clouds, as seen in the imageâ€™s background, is very distant and seems blocked-off and separated by a row of portable outhouses, a concrete fence, and power lines. The focal point, however, is this man who finds happiness and liberation in a temporary moment. â€œLeg Upâ€ signifies the poetryâ€™s last stanza: â€œIt matters not how strait the gate; How charged with punishments the scroll; I am the master of my fate: I am the captain of my soul.â€

Formed in 1998, the Iris PhotoCollective is a project spearheaded by four like-minded photographers: Carl Juste, Andre Chung, Pablo Martinez Monsivais, and Clarence Williams. As artists of color themselves, they are each concerned with the way their communities are depicted in the media. Through a shared mission to explore and document the relationships of people of color to the world, their photographic projects create a record that is free of the influence of the dominant culture, while maintaining the integrity and principles of photojournalism. Their visual stories document their work from around the world.

â€œInvictus: Haiti Unconqueredâ€ is the essence of visual poetry and a clear reminder of the importance of photojournalism and its power to draw peopleâ€™s attention to the world. During an interview with Dick Gordon of North Carolina Public Radio in February 2010, Juste, still recovering from the dust and trauma associated with his recent departure from Haiti, manages to find deliverance for the country he has only come to know first-hand through his work. â€œDuring the earthquake the rich were impacted, the poor were impacted. No one was segregated and for the first time at least that I can remember, the plight of the Haitian became the plight of the world.â€ Juste concludes, â€œAnd maybe out of all of this pain and all this suffering, there is a rebirth, but not only a rebirth of a nation, of an island nation, but of ourselves.â€

Free. Groups should call in advance.