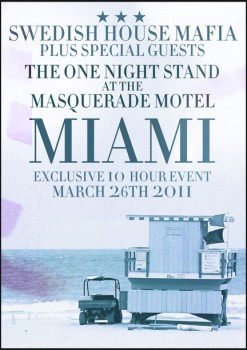 For 2011â€¦ Swedish House Mafia are pleased to announce, they will be returning to Miami for a unique concert, â€˜The One Night Stand at The Masquerade Motelâ€™ on March 26th 2011. Housed in a customised Arena, the ten hour exclusive extravaganza will be bursting with a fantastic light show, special guests and, of course, the boysâ€™ exclusive performance.

Tickets go on sale Dec 21st 2010 and other acts will be announced throughout December and January. So, join Swedish House Mafia as they take Miami into their own hands and treat you to their best show yet.