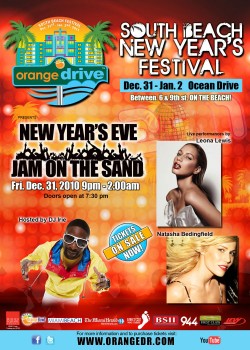 Orange Drive, jointly developed by Union Square Agency (USSE Corp., Pink OTC Symbol: UCRP) and the Orange Bowl Committee, today unveils its scheduled lineup for â€˜Jam on the Sandâ€™, a beachside soiree in an 8,000-person amphitheatre. The New Yearâ€™s Eve bash will make South Beach a hot destination to ring in the new year. The complete lineup is as follows:

â€¢ Sounds will be provided by Miami Heatâ€™s official DJ â€“ DJ Irie. When DJ Irie is not getting Heat fans on their feet, the Miami DJ is recognized for turning tables with his custom mixes at various night clubs and private parties throughout South Beach.

Orange Drive, taking place alongside South Beachâ€™s illustrious Ocean Drive, will stretch from Sixth to Ninth Street. Kicking off on New Yearâ€™s Eve day and extending through January 2nd, the street fest will host a dynamic array of events leading up to the Discover Orange Bowl Game.

Orange Drive is an intellectual property developed by Union Square Agency and the Orange Bowl Committee. The inaugural three-day festival will be kicking off on New Yearâ€™s Eve day and extending through January 2nd, alongside South Beachâ€™s famed Ocean Drive. Orange Drive will host a dynamic array of events leading up to the Discover Orange Bowl game including a New Yearâ€™s Eve party; an En Vivo Latino festival; a Kidâ€™s Countdown & Concert and Gridiron Bash Pep Rally. Orange Drive is partnering with local and national brands, along with media partners, to promote brand activation sites, entertainment pavilions and local merchants.