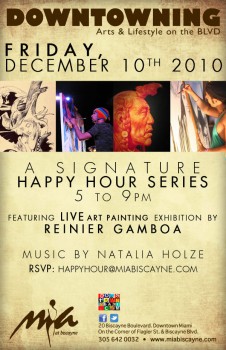 On the heels of a successful run during Art Basel Miami Beach 2010, local pop and multi-media artist, sculptor and urban realist Miguel Paredes will host a cocktail reception at Paredes Fine Art Gallery on Saturday, December 11, 2010 from 7:00 p.m. to 11:00 p.m. during the â€œ2nd Saturdays Art Walkâ€ in the Wynwood Arts District.

In celebration of Paredesâ€™ hit exhibitions and events during the famed Art Basel festivities â€“ including two at the Wynwood studio that attracted more than three thousand visitors in total â€“ Saturdayâ€™s reception will offer guests the opportunity to view pieces Paredes debuted only a week ago, such as those from his popular Los Ninos, Boroughs and Pulgha & Birds series, a sculpture version of Miguelâ€™s painting â€œIn the Name of Americaâ€ and his all-new series, Elements of an Artist. Also still available for viewing are works by Graffiti Artists SKI and 2ESAE of UR New York and celebrated pop/rock photographer Danny Clinch. In addition to mingling with Paredes in his post-Art Basel glow, guests will enjoy complimentary a signature cocktail, The Sapphire Dhiva, sponsored by Bombay Sapphire.

Paredes was born in New York and is of a Latin American descent. He is an artist who combines the exhilarating sense of New York Cityâ€™s graffiti art with the skill and perceptiveness of a true exceptional artist. Growing up on 72nd Street in the Upper West Side of Manhattan, Paredes exuded early signs of artistic ability and accepted an invitation to New York Cityâ€™s prestigious Fiorello La Guardia High School of Music and Art â€“ immortalized in the musical and movie Fame â€“ in the early 1980s. His studies at Fiorello coincided with the explosion of street culture in the city. Paredes drew inspiration from notorious pop artists like Andy Warhol and Keith Haring and plunged into the world of graffiti and pop art taking the name â€œMistâ€ as his moniker.

At Paredes Fine Arts Studio, the artist will also exhibit select pieces and sculptures from collections such as Los NiÃ±os, Urban Dreams and Pulgha & Birds.